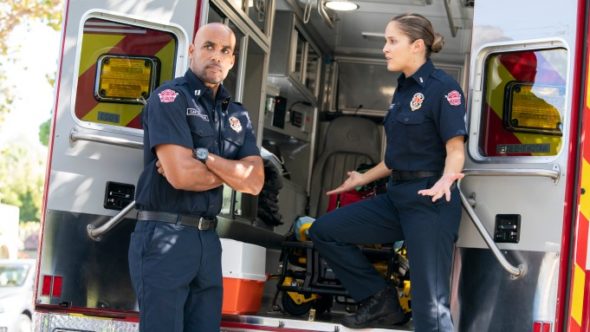 The fire trucks of Station 19 will keep rolling in the 2022-23 television season. ABC has renewed the first-responder drama series for a sixth year. Yesterday, the alphabet network renewed sister series Grey’s Anatomy for a 19th year.

The Station 19 TV show stars Jaina Lee Ortiz, Jason George, Boris Kodjoe, Grey Damon, Barrett Doss, Jay Hayden, Okieriete Onaodowan, Danielle Savre, Stefania Spampinato, and Carlos Miranda. The TV series centers on the heroic firefighters at Seattle Fire Station 19. From the captain to the newest recruit, they risk their lives and hearts both in the line of duty and off the clock. The brave men and women are like family and together, they put their own lives in jeopardy as first responders to save the lives of others.

The fifth season of Station 19 averages a 0.63 rating in the 18-49 demographic and 4.56 million viewers (which includes same-day viewing and DVR playback through 3:00 AM). Compared to season four, that’s down by 25% in the demo and down by 12% in viewership in the live+same day ratings. In the live+7 day ratings, the fifth season averages a 0.94 demo with 6.27 million. That’s an average increase of 50% and 38%, respectively, compared to the same-day ratings.

“Station 19” follows a group of heroic Seattle firefighters as they put their lives and hearts on the line. The latest series, from the executive producers of “Grey’s Anatomy,” takes us inside the tough, tight-knit and sometimes heartbreaking world of the city’s bravest first responders.

“It’s a privilege to tell stories of our heroic first responders, who on our show and in real life put their lives on the line every day to keep us all safe,” said Vernoff. “I’m so grateful to Disney and ABC for the early pickup for season six of ‘Station 19!’ It’s a tribute to the incredible work of our talented cast, crew, writers and creative team, as well as the dedication of our loyal fans who tune in every week.”

“The riveting storytelling and passionate fan base that ‘Station 19’ continues to cultivate is a testament to the unrelenting dedication of Krista Vernoff and the incredibly talented cast and crew,” said Craig Erwich, president, Hulu Originals and ABC Entertainment. “Coupled with yesterday’s renewal of ‘Grey’s Anatomy,’ the return of ‘Station 19’ ensures more crossover opportunities and a thrilling night of appointment television.”

“Station 19” averages a 2.17 rating among Adults 18-49 this season after 35 days of viewing on linear and digital platforms, marking an increase of +234% over its initial Live+Same Day rating.

Check out our ABC status sheet to track the alphabet network’s new series pickups, renewals, and cancellations. You can find lists of cancelled shows here.
What do you think? Are you a regular viewer of the Station 19 TV series on ABC? Are you glad to know that the show has been renewed for season six?

Love the show!!!! I would prefer them to reunite Andy and Sullivan, they made an awesome couple and the chemistry was also off the charts.

I’m addicted to the series I love it

So pleased Station 19 on again i love the show

I don’t like when you take a good show and make it too much like a soap opera .
I like it, but we’ll see what happens.

I’m so happy that they renewal station 19. Now I’m waiting on my other tv shows.

I am so elated to know that Station 19 has been renewed. It and Grey’s Anatomy are my favorite shows.

Robert needs to tell Andy to take a hike and he needs to move on. She things she’s better than everyone else and can do no wrong.
Glad this show is returning but I would like to see more action rather than all the personal drama!

Shonda’s brand is soapy, personal drama. All of her shows are pretty much primetime soap operas, always have been. If you want more action-driven firefighter shows, you’re better off with Chicago Fire and 9-1-1. They both have tons of action, although 9-1-1 has more outrageous action sequences since it’s a Ryan Murphy show. Chicago Fire is more gritty and realistic. It also examines the psychological toll on first responders, particularly older firefighters more. There’s a good balance between the two.