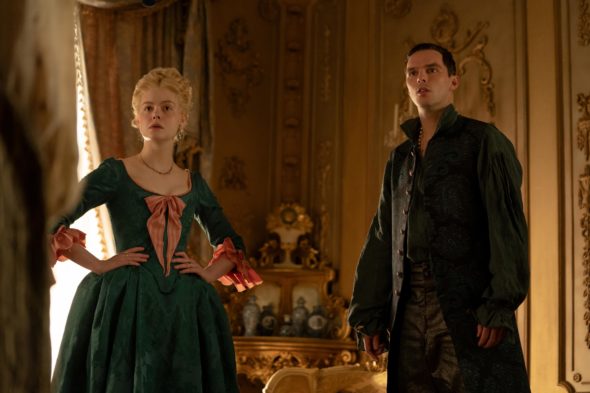 Huzzah! Hulu has renewed The Great TV series for a third season of 10 episodes. The second season of the loosely historical series was released on November 19th and the show is one of the streamer’s top-performing series.

Created, written, and executive produced by Tony McNamara, The Great stars Elle Fanning, Nicholas Hoult, Phoebe Fox, Adam Godley, Gwilym Lee, Charity Wakefield, Douglas Hodge, Sacha Dhawan, Bayo Gbadamosi, and Belinda Bromilow. In season two, Catherine (Fanning) finally takes the Russian throne for her own. However, if she thought coup-ing her husband was difficult, it’s nothing compared to the realities of ‘liberating’ a country that doesn’t want to be liberated. She battles her court, her team, even her own mother in a bid to bring the enlightenment to Russia.

A premiere date for season three will be announced at a future time. Here’s the renewal announcement from Hulu:

Huzzah! 🥂 Let us celebrate! #TheGreat will return for a third season on @hulu! pic.twitter.com/HkiNe3kECG

What do you think? Have you watched The Great TV series on Hulu? Are you glad that this show has been renewed for season three?

i guess i’m in the minority in the comments because i found The Great to be an absolute delight, so original and fun, can’t wait for Season Three.