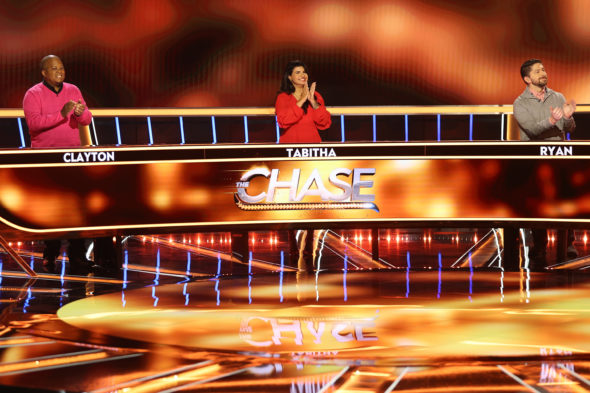 Which Chaser can beat the most players on the second season of The Chase TV show on ABC? As we all know, the Nielsen ratings typically play a big role in determining whether a TV show like The Chase is cancelled or renewed for season three. Unfortunately, most of us do not live in Nielsen households. Because many viewers feel frustration when their viewing habits and opinions aren’t considered, we invite you to rate all of the second season episodes of The Chase here. Status Update Below.

An ABC game show, The Chase TV series is hosted by Sara Haines. The game show is a fast-paced competition where three competitors must use their wits and knowledge to face off against the Chaser, a ruthless quiz genius who is determined to stop the contestants from winning cash prizes. In each episode, contestants are challenged to think faster than they ever thought possible, to answer up to 166 questions across all topics. Jeopardy! trivia masters James Holzhauer, Ken Jennings, and Brad Rutter are joined by Mark Labbett (from the original UK version of the show) and they each take turns serving as the Chaser.

What do you think? Which season two episodes of The Chase TV series do you rate as wonderful, terrible, or somewhere between? Do you think that The Chase should be cancelled or renewed for a third season on ABC? Don’t forget to vote, and share your thoughts, below.

Please.bring back The Beast for next season on Chase

Without Mark and Brooke it no longer The Chase. How they are not brought back is beyond me

Please renew The Chase. It is one of the few non cable TV shows that I watch. It’s an escape show that takes me out of the current cruelty of the situation of the world

Love the show and hope it’s renewed for another season. Looks as if we could have a new chaser with Matt winning on Jeopardy. Sarah does an excellent job–very professional yet personable.

I look forward to watching the Chase each week. I love its fast pace and think Sarah Haines is remarkably quick, personable and MAKES the show work along with the 4 Jeopardy champions each week. How I hope it is renewed!!

We believe that Brook Burns f the Current Day time Host of the Chase [DAYTIME] should be hostess. She work exceptional well with Mark Labbeth
and the Contestants.

The ABC Chase is a wonderful show, but I believe there should be 16 shows instead of 12. I hope it is renewed. Anne Hegerty would be a wonderful addition minus the gov. uniform.

I like The Chase for a lot of reasons, different chasers, different hostess, good questions. Keeper!

It’s my second favorite game show, after Jeopardy! Once a week is not enough.

I have only watched it once, it was ok .