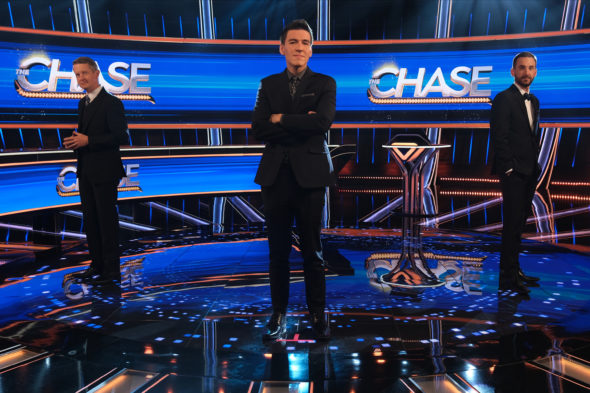 The chase continues. ABC has renewed The Chase TV show for a second season which will air this summer, debuting on Sunday, June 6th, at 9:00 PM.

A quiz show, The Chase series is hosted by Sara Haines. The show is a fast-paced competition where three competitors must pit their wits and face off against the Chaser, a ruthless quiz genius who is determined to stop them from winning cash prizes. Each episode, contestants are challenged to think faster than they ever thought possible, to answer up to 166 questions across all topics. Trivia masters James Holzhauer, Ken Jennings, and Brad Rutter take turns serving as the Chaser.

Airing earlier this year on Thursday nights, the first season of The Chase averaged a 0.69 rating in the 18-49 demographic and 4.67 million viewers.

What do you think? Have you watched this newest version of The Chase TV show on ABC? Are you looking forward to season two?

Great show, the chasers are funny with the little comments they make here and there. Give it a chance to build an audience. Please don’t cancel it. Jeopardy and the Chase are my two favorite shows .

I love The Chase. Most interesting, competitive and knowledgeable trivia show ever. I love The Beast!

Just watched The Chase for the first time and consider it to be the worst game show EVER! One hour with three contestants and not a dime for either of them. What a crappy deal. The last contestant had $200,00 and wow, that seem great until ,Oh, my she still had to give more answers than James did. This show sucks, and we will never watch it again.

I love the Chase! Please don’t cancel it!!

We love this program!!

If I’m not mistaken, the Beast made a comment in regard to the Wizard of Oz question and it was, “We’re not in Iowa anymore,”…..uh, Beast, it’s not Iowa….it’s Kansas.

This show is SO unfair to the contestants. Over and over the chaser gets easier questions and it seems rigged. Tired of watching 3 egomaniacs talk about how smart they are and watch 3 contestants walk away with nothing. They should get something at least…especially if they make it to the final chase.

I agree with you wholeheartedly. Contestants should get something like on Jeopardy and Wheel of Fortune.

I loved the show until I started to catch incorrect information. Example: 10thpresident John Tyler had 15 children, not 20, and did not have children into his 80s. He died at age 71. If you run a trivia question show, get your facts straight.

Brooke Burns should return as host as she is much more entertaining and a much better host. Her personality and her banter is very engaging! Unfortunately the new host is very dull and not very engaging. Also thank goodness “The Beast” will be returning on June 6th 2021! Now just bring back Brooke!

I totally agree agree with you. Brooke should return. She adds enthusiasm and anxiety to the show. She brings the show alive and adds suspense and drama to it. Please bring her back.

I do not see the reason for adding the beast, the show was fine without him.

Good show but not as good as the one on the game show network. I enjoyed “the beast” and the host thoroughly

Watched the first episode of the new chase,I think it’s boring.liked the beast

Thought the show was fantastic! Sara Haines was excellent hosting and loved the chasers.Look forward to another season..

Loved the show. Best episode for me would be when the pandemic ends to have contestants mark labett (the beast from 2013-2015) Raj (beat the beast by himself) muffy or johnathan from master minds on game show network against james, ken or brad for charity that i would love to see.

Sooo excited to know The Chase is coming back. I love it. Hope Ken Jennings gets the host job at Jeopardy!

One of the best shows ever. Great host and those 3 guys are fantastic. Can’t wait till it comes back.