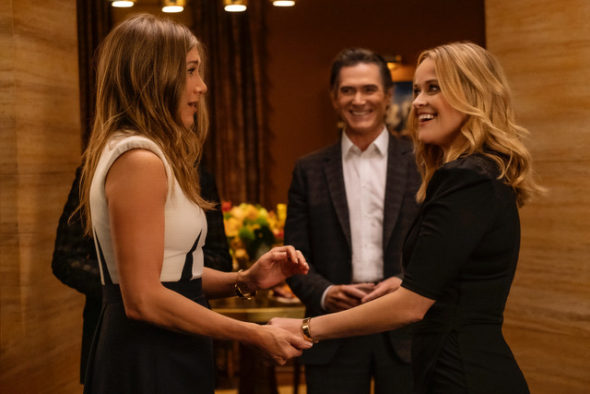 Apple TV+ has announced the launch of the second season of The Morning Show, the streaming service’s drama series. Season two will kick off on Friday, September 17th. There will be 10 episodes once again and installments will be released weekly.

Here’s more information about the second season, as well as a teaser video:

Today Apple TV+ debuted a first look at the highly anticipated sophomore season of the Emmy, SAG and Critics Choice award-winning series, “The Morning Show.” Starring and executive produced by Jennifer Aniston and Reese Witherspoon, the broadly acclaimed drama that unveils the power dynamics in the workplace between women and men, and women and women, makes its return on Friday, September 17, 2021 on Apple TV+. The 10-episode second season will premiere with the first episode, followed by one new episode weekly, every Friday.

Picking up after the explosive events of season one, season two finds the Morning Show team emerging from the wreckage of Alex (Aniston) and Bradley’s (Witherspoon) actions, to a new UBA and a world in flux, where identity is everything and the chasm between who we present as and who we really are comes into play. Along with Aniston and Witherspoon, the star-studded returning cast includes Steve Carell, Billy Crudup, Mark Duplass, Nestor Carbonell, Karen Pittman, Bel Powley, Desean Terry, Janina Gavankar, Tom Irwin and Marcia Gay Harden. Joining the cast for season two are Greta Lee as ‘Stella Bak,’ a tech world wunderkind who has joined the UBA executive team; Ruairi O’Connor as ‘Ty Fitzgerald,’ a smart and charismatic YouTube star; Hasan Minhaj as ‘Eric Nomani,’ a new member of the Morning Show team; Emmy Award-winner Holland Taylor as ‘Cybil Richards,’ the savvy chairwoman of the UBA board; Tara Karsian as ‘Gayle Berman,’ a news producer; Valeria Golino as ‘Paola Lambruschini,’ a documentary filmmaker; and, Emmy and SAG Award-winner Julianna Margulies as ‘ Laura Peterson,’ a UBA news anchor.

Developed by Kerry Ehrin, who serves as showrunner and is an executive producer, “The Morning Show” is executive produced by Michael Ellenberg through Media Res, which also serves as the studio, along with Jennifer Aniston and Kristin Hahn through Echo Films; Reese Witherspoon and Lauren Neustadter through Hello Sunshine; and Mimi Leder, who also directs several episodes.

In its first season, Crudup’s performance as ‘Corey Ellison’ earned an Emmy win in the Supporting Actor in a Drama Series category in addition to a Critics Choice Award. Aniston’s powerful performance as ‘Alex Levy,’ earned a SAG Award for Outstanding Performance by a Female Actor in a Drama Series. The series also received nominations from the Television Critics Association for Outstanding New Program and a TV Choice Award for Best New Drama.

Apple TV+ offers premium, compelling drama and comedy series, feature films, groundbreaking documentaries, and kids and family entertainment, and is available to watch across all your favorite screens. After its launch on November 1, 2019, Apple TV+ became the first all-original streaming service to launch around the world, and has premiered more original hits and received more award recognitions faster than any other streaming service in its debut. To date, Apple Original films, documentaries and series have been honored with 109 wins and 380 awards nominations.

Apple TV+ is available on the Apple TV app in over 100 countries and regions, on over 1 billion screens, including iPhone, iPad, Apple TV, Mac, popular smart TVs from Samsung, LG, Sony, VIZIO, TCL and others, Roku and Amazon Fire TV devices, Chromecast with Google TV, PlayStation and Xbox gaming consoles, and at tv.apple.com, for $4.99 per month with a seven-day free trial. For a limited time, customers who purchase a new iPhone, iPad, Apple TV, Mac or iPod touch can enjoy one year of Apple TV+ for free. This special offer is good for three months after the first activation of the eligible device.

Check out our status sheets to track new TV series pickups, renewals, and cancellations. You can find lists of cancelled shows here.
What do you think? Have you watched the first season of The Morning Show? Will you be checking out season two of this Apple TV+ series?

Looking forward to Season 2 but the teaser is not very appealing, with the worst rendition of New York New York I’ve ever heard, sung flat.