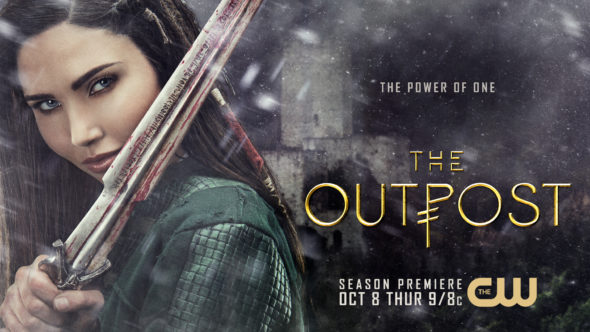 An adventure-fantasy series, The Outpost stars Jessica Green, Jake Stormoen, Imogen Waterhouse, Anand Desai-Barochia, Aaron Fontaine, Adam Johnson, Izuka Hoyle, and Jaye Griffiths. The story centers on Talon (Green), the lone survivor of the “Blackbloods” race. When she was still a child, a ruthless mercenary gang slaughtered her entire village. Now that she has come of age, Talon has come into a mysterious power. In season three, Talon finds herself betrayed by her own kind, after summoning Zed and his Blackblood comrades to save the Outpost. She struggles to reconcile her human friends and her heritage.

1/4 update: You can see the latest night’s ratings in context.

What do you think? Do you like the The Outpost TV series on The CW? Should it be cancelled or renewed for a fourth season?

I love the Outpost! Please tell me Imogene Waterhouse’s character isn’t really gone. First Tobin, now Gwyn? NO WAY! Really looking forward to the next 13 episodes! I hope it runs for many more years.

26 eps for a low rating show?! This is odd in the history.