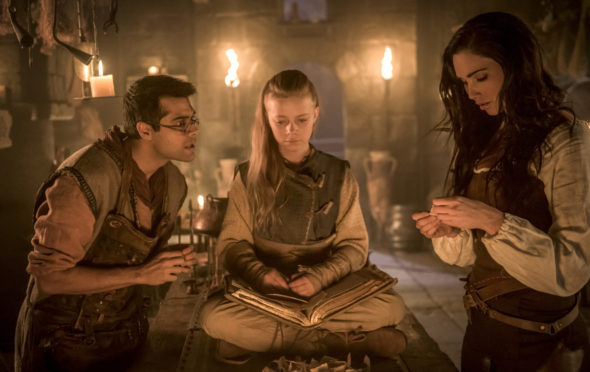 How well is Talon fulfilling her destiny during the second season of The Outpost TV show on The CW? As we all know, the Nielsen ratings typically play a big role in determining whether a TV show like The Outpost is cancelled or renewed for season three. Unfortunately, most of us do not live in Nielsen households. Because many viewers feel frustration when their viewing habits and opinions aren’t considered, we’d like to offer you the chance to rate all of The Outpost season two episodes here. *Status update below.

A CW fantasy drama, The Outpost stars Jessica Green, Jake Stormoen, Anand Desai-Barochia, Imogen Waterhouse, Robyn Malcolm, and Andrew Howard. The story centers on Talon (Green), the lone survivor of the “Blackbloods” race. When she was still a child, a ruthless mercenary gang slaughtered her entire village. Now that she has come of age, Talon has come into a mysterious power. Having defeated Dred’s army and retaken the Outpost, in the second season, Talon and Gwynn (Waterhouse) ready themselves to battle the Prime Order.

What do you think? Which season two episodes of The Outpost TV series do you rate as wonderful, terrible, or somewhere between? Should The CW cancel or renew The Outpost for a third season? Don’t forget to vote, and share your thoughts, below.

BOTH SEASONS ARE GREAT.. THE TEACHES US ABOUT HATE, HOW TO CONTROL IT AND HO TO TRUST OUR FRIENDS…. BESIDES ITS ACTION THEME IS GREAT… I THINK WE SHOULD GET A SEASON 3 … I LOVE IT.. I MEAN WE LOVE IT… THANK YOU…

Great show!!! Love the mix of characters and the fresh evolving story lines!!! The actors are very likable!!! Critical reviews are just that, critical stuffed shirts with tunnel vision and inflated egos. Bravo to The Outpost, well done and we’ll performed creativity, keep it going, it’s a fun ride!!!

I think this show is great .I look forward to it every week . In season 2 the characters have more depth of character . I really hope this is renewed for Season 3..Gwynn makes an excellent queen.

Game of thrones had the worsed ending of all time by far. Now the outpost I like way more than stupid GOT. Outpost has a great story and great actors. They all awesome. There better be a s3

Looove this series. Didnt expect to love it this much. All the characters are awesome but my fav are Janzo and talon. Janzos mom also a cool villain 😉

The two episodes of the season finale are very good as we learn that the three have that thing in their head same as the black blood. The last episode provides no surprise as it was foreseeable that the black bloods were going to claim the outpost. I certainly hope that we won’t be left in the dark as to what happens with the not so popular occupation of the outpost by the black bloods.

These last two episodes were both good. But the last one This Is Our Outpost was incredible.
The ending was unexpected and tantalizing. Really hope there is a season 3. It would be unfair to not bring this to a conclusion. So much in this show resonates with our own times.

It’s just starting to get good!