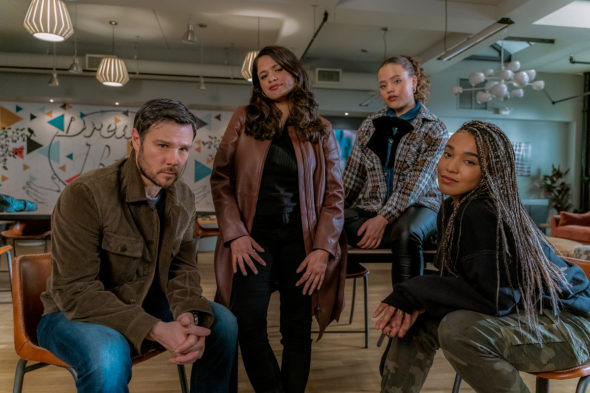 Is the new trio up to the challenge? Has the Charmed TV show been cancelled or renewed for a fifth season on The CW? The television vulture is watching all the latest cancellation and renewal news, so this page is the place to track the status of Charmed, season five. Bookmark it, or subscribe for the latest updates. Remember, the television vulture is watching your shows. Are you?

Airing on The CW television network, the Charmed TV show stars Melonie Diaz, Sarah Jeffery, Lucy Barrett, Rupert Evans, and Jordan Donica. A reboot of the 1998 series, the show begins as three sisters discover they are witches in the wake of their mother’s murder. Soon, this powerful threesome must stand together to harness “The Power of Three” and protect humanity from the demons that prowl the earth. In season four, sisters Mel (Diaz) and Maggie (Jeffery) find their lives transformed by the death of their beloved sister, Macy (Madeleine Mantock). But when their grief threatens to undo the Power of Three forever, the surprising arrival of a third Charmed One (Barrett) gives them a renewed opportunity to fulfill their destinies. Meanwhile, a mysterious new enemy is rising in the shadows, instilling fear in every corner of the magical world.

The fourth season of Charmed averages a 0.06 rating in the 18-49 demographic and 350,000 viewers in the live+same day ratings (including DVR playback through 3:00 AM). Compared to season three, that’s down by 29% in the demo and down by 8% in viewership. While these numbers don’t include further delayed or streaming viewing, they are a very good indicator of how a show is performing, especially when compared to others on the same channel. There can be other economic factors involved in a show’s fate, but typically the higher-rated series are renewed and the lower-rated ones are cancelled. Find out how Charmed stacks up against other CW TV shows.

Will The CW cancel or renew Charmed for season five? Charmed has been one of the network’s lowest-rated shows in the past but the smallest network pays less attention to the ratings than the big boys. The network is currently up for sale so it’s expected that CW will commit to fewer shows than usual for 2022-23. I think it’s likely this CBS Studios-produced series will be renewed but it could end up being moved to Paramount+, depending on if/when the CW is sold. I’ll update this page with breaking developments. Subscribe for free alerts on Charmed cancellation or renewal news.

What do you think? Were you hoping that the Charmed TV show would be renewed for a fifth season? Are you sorry that The CW cancelled this TV series, instead?

I really don’t think it’s been given enough of a chance considering everything it’s had to overcome. I really wish the CW would reconsider. Flood their Twitter page.

Yeah charmed reboot is no more!!! Original was great! It did not need a reboot. It might of worked if they added to the OG charmed canon. Maybe Maggie could have dated Wyatt or Chris? But no the new producers wanted their own thing!

Charmed to get a season 5 and season 6 should be renewed vote for it to have another season so they can end it properly you always leave Seasons hanging let them end it properly that’s my opinion.

No season 5 guys they don’t care about us. I’m calling it now.

I will be so upset! Especially because I’m a huge lesbian

Great show! Love the introduction of a new sister like the original show. Renew season 5 already!!!

I really enjoy the show,please renew!

I am really enjoying season 4 – I hope it gets renewed

I really love this show, I hope it is renewed please!

I am so there with you. I share the first one with my kids who are now grown and have been sharing the new one with my star over child. Love it.

Please don’t take charm off the air, it seems like you get into a good show and they end up canceling it, if I don’t watch it I always have it taped, I don’t know who decides to keep or canceling it but there are several shows I get into then they canceling it I’m 59 it’s one of my favorite shows

Totally agree! It seems like every show I really like gets cancelled. I am the same age.

Yasssssssss girl I’m 43 and I love it.

54 here and feel the same way. I like that it’s quirky and different from others shows. The Cw has always had a history of uncommon shows that were great to watch. I hope they change their minds.

I really hope Charmed is renewed for Season 5. I think it’s great that we will be exploring the connection with Melinda Warren next season if we are renewed.