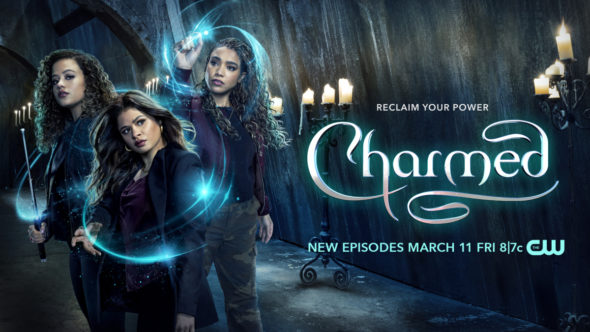 In the original Charmed series, one of the series’ leads left the show after three seasons. And now, more than 20 years later, history has repeated itself with the current CW reboot. Will this cast change affect the ratings in some way? Will Charmed be cancelled or renewed for season five? Stay tuned. *Status update below.

A supernatural drama series, the Charmed TV show stars Melonie Diaz, Sarah Jeffery, Lucy Barrett, Rupert Evans, and Jordan Donica. A reboot of the 1998 series, the show begins as three sisters discover they are witches in the wake of their mother’s murder. Soon, this powerful threesome must stand together to harness “The Power of Three” and protect humanity from the demons that prowl the earth. In season four, sisters Mel (Diaz) and Maggie (Jeffery) find their lives transformed by the death of their beloved sister, Macy (Madeleine Mantock). But when their grief threatens to undo the Power of Three forever, the surprising arrival of a third Charmed One (Barrett) gives them a renewed opportunity to fulfill their destinies. Meanwhile, a mysterious new enemy is rising in the shadows, instilling fear in every corner of the magical world.

5/21 update: You can see the latest night’s ratings in context.

What do you think? Do you like the Charmed TV series on The CW? Should it be cancelled or renewed for a fifth season?

I love charmed reboot. I love it to renew on cw since it is already chancel

It’s still a horrible reboot that some people like, let’s face it. It shouldn’t have been made by the CW but something like the Disney channel instead.

**** YOU CW I LOVE BOTH CHAMED Series when the original ended I was devastated and now the new ones ending what the hell one of the only things that keep me going THANKS ALOT CW.

Well they got the AX without mantock and Drayton I knew it was not going to make it. I blame the writers to some degree, but the acting never got any better. Macy and Abby made that show!!!!! I think they both saw it coming!!!!

Marisol should have said give me three instead of I have three. That way we would have had Maggie, Mel & Kaela from the very beginning (they butchered my/our favourite tv show). They should change the name to Butched or something different if they hope to renew it. They ruined ‘Charmed’ in the name of money and now they’re not making any. So many reboot related videos with no comments.

Need to do something with kayla’s power very lame and weak. Seems Maggie’s powers never stop growing. So give some new powers to kayla, and let’s get on with finding out how she’s connected to Maggie and mel.

Please don’t cancel charmed. Some of us really love it

Would’ve made this show a stand alone spin off called Chosen (with possible ties to the original).

I now understand why they took there time with the Kaela reveal.

You are a Charmed one without being related to myself and my Sistser. I’ll just kill your birth parents by accident with Frog toxin.