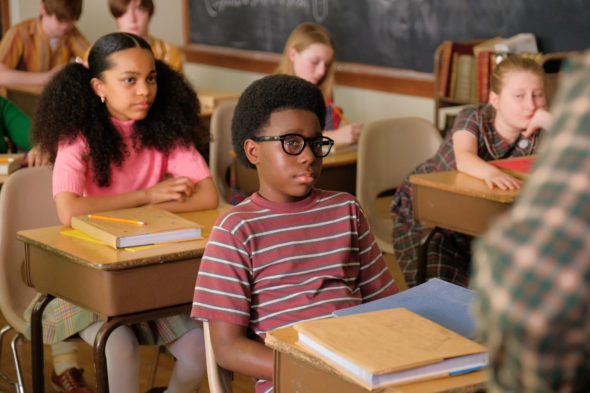 What life lessons will Dean learn in the first season of the The Wonder Years TV show on ABC? As we all know, the Nielsen ratings typically play a big role in determining whether a TV show like The Wonder Years is cancelled or renewed for season two. Unfortunately, most of us do not live in Nielsen households. Because many viewers feel frustrated when their viewing habits and opinions aren’t considered, we invite you to rate all of the first season episodes of The Wonder Years here. Statu Update Below.

An ABC coming-of-age comedy series, The Wonder Years TV show was inspired by the original 1988 series. This incarnation stars Don Cheadle, Elisha “EJ” Williams, Dule Hill, Saycon Sengbloh, Laura Kariuki, Julian Lerner, Amari O’Neil, and Milan Ray. Set in the late 1960s, the series takes a nostalgic look at the Williams family — Black middle-class residents of Montgomery, Alabama — through the point of view of imaginative 12-year-old son Dean (Williams). The story is narrated by Dean as an adult (Cheadle). His hopeful and humorous recollections of his past spotlight the ups and downs of growing up in that time and place, as well as the friendship, laughter, and lessons Dean encountered along the way.

What do you think? Which season one episodes of The Wonder Years TV series do you rate as wonderful, terrible, or somewhere between? Do you think that The Wonder Years should be cancelled or renewed for a second season on ABC? Don’t forget to vote, and share your thoughts, below.

I love this show just as much as I love the original! So refreshing to be able to see how the rest of the world grew up during this time period and having Fred Savage produce and direct is an extra bonus!!!

I love it. Reminds me of my life during that time! And that things haven’t changed much!

So far I’m enjoying the remake and kinda like how they have changed the characters. Will definitely give a different take on growing up in this time period, which I did. I was 12 years old when mlk was assassinated. Looking forward to how things go moving forward.

I didn’t watch it, I probably won’t, only because it’s a re-make of an old show .

Show reruns of The original show.

CANCEL!!! I haven’t watched the REBOOT, I will NEVER watch it! You can’t mess with the original!

CANCEL!! This isn’t even close to the original series.