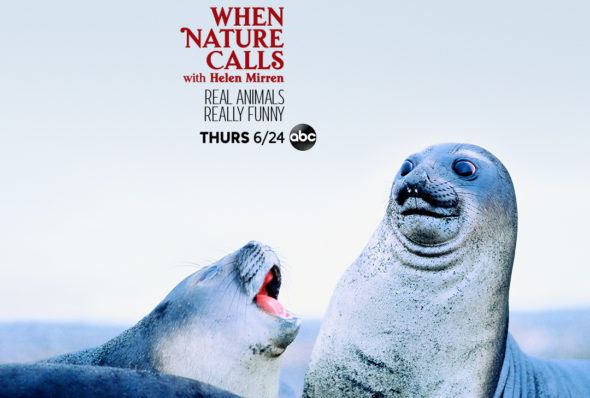 The America’s Funniest Home Videos TV show has run for many years on ABC and has been relatively inexpensive to produce. Now, the network is trying something in a similar vein with animals in the wild. How long will it last? Will When Nature Calls with Helen Mirren be cancelled or renewed for season two? Stay tuned.

A comedy series based on a BBC format, When Nature Calls with Helen Mirren is a documentary examination of the animal kingdom that looks at the lighter side of the natural world. Narrated by Mirren, the show features comedians putting words into the mouths of beautiful beasts, teeny-tiny frogs, beatboxing badgers, and more in beautiful footage from all over the world. Comedic scenarios include a field mouse who is killing it with NFTs, a divorced bear gym teacher whose students have heard gossip about his private life, a dragonfly movie star who can’t take direction, a beetle named Tony with anger management issues, a supermodel lemur, a thousand-year-old fairy fish trying to find someone who wants to make a wish, the new hit game show “Wolf or Rock”, and a crab who writes erotic fiction.

1/2 update: You can see the latest night’s ratings in context.

What do you think? Do you like the When Nature Calls TV series on ABC? Should it be cancelled or renewed for a second season?

Thought this was a pbs like nature show. SO dislike the stupid commentary, detracts from the show. Who is this for? Is this for kids with off color remarks? Always liked Helen Miren, don’t like this show at all. Have tried to get by the ridiculous commentary, watched the show several times. Won’t watch again. You all can do better!

This show has a lot of subtle humor. All the voices are great. The bonus is the exceptional photography. I’m surprised it rated so low.

Please cancel. I love nature shows where I can learn stuff but this was just stupid…

Very disappointed!!! Was expecting a great show with great views of nature (views were great) and Helen Mirren narrating it all with grace and style. Not so much – the voice overs of animals speaking really dumbs down the content and ruins the show, and Helens dry comments were too much to continue watching – had to turn to another channel. Not sure who wrote the script, but not written for a mature audience.

This is the greatest way to demean animals. Way to go. Please remove the show or show respect to our animals.

How disappointing! I knew it was a 50/50 shot of being good or terrible (the advertisements were fairly spot on to the actuality of the show). But just like everyone else – Helen Mirren sooo have to hold onto that last hope! What a tragic suggestion to how any sort of narrative should ever take place. At this point with all the awful and ridiculously lazy shows coming out, all I can say is NEXT.

What a disappointment! I only was interested in this show because….Helen Mirren. She’s a wonderful actress. When the stupid remarks and off color jokes started my husband and I could not believe it. After reading several reviews I find that most people thought the same. I am deleting the two episodes right now. Poor Helen, I wonder if she knew what a mess this was going to be? What was the BBC thinking, or was it ABC? Big mistake.

I love the idea behind the show “When Nature Calls “, but, the voice overs are just stupid and ruins the show. I understand it’s supposed to be a comedy, but the voices are so irritating. The scenery is spectacular and the flora and fauna amazing only to be destroyed with idiot voice overs.

There is so little interesting and entertaining on TV now, I thought this sounded good. Seeing strange and unusual critters in different places? If that had been it, it would have been good, but the silly “story lines” made up and voices for the animals, not only was it stupid, it quickly got boring and I turned it off. I’d have liked to have seen about the unusual species, without the made up stuff with it. I wonder how many people will watch the 2nd episode?

Inane… Insulting to its inadvertent animal participants. We muted it after 5 minutes just to watch the visuals. But even that began to be insulting to the critters and silly looking with silly pratfalls and other stupid stuff. A horrific piece of crap that Helen Mirren is sadly associated with. Message to Helen: recommend you see the final edits to see the stupidity you’ve accidentally associated yourself with. The producers owe you an apology.

Inappropriate show for young children to watch. I found it disgusting.