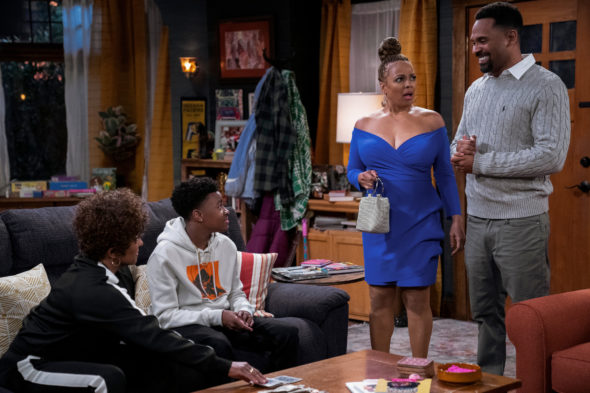 Netflix wants more of Bennie and his family. The streaming service has renewed The Upshaws TV series for a second season.

A family sitcom, The Upshaws TV show stars Wanda Sykes, Mike Epps, Kim Fields, Page Kennedy, Diamond Lyons, Khali Spraggins, Jermelle Simon, Gabrielle Dennis, and Journey Christine. It follows a working-class family in Indiana who struggles to make it work — and make it right — without the blueprint to do it. Bennie Upshaw (Epps) is the head of a Black working-class family in Indianapolis. He’s a charming, well-intentioned mechanic and lifelong mess just trying his best to step up and care for his family. He’s married to Regina (Fields) and they have three children together — daughters Aaliyah (Spraggins) and Maya (Christine) and son Bernard Jr. (Simon). Bennie’s teenage son Kelvin (Lyons), who is the same age as Aaliyah, has a strained relationship with his dad. He was conceived with Tasha Lewis (Dennis) when Bennie thought that he and Regina were on a break. There’s also sardonic Lucretia (Sykes), Regina’s older sister who doesn’t like Bennie but still provided money to open his garage. Through thick and thin, the Upshaws are determined to make it work, and make it to the next level, together.

The first season of 10 episodes was released on May 12th and had 10 episodes. The second season of The Upshaws will have 16 installments and they will be released in two groups of eight. A release date will be revealed at a later time.

What do you think? Have you watched The Upshaws TV show? Will you be watching season two of this Netflix comedy series?

I love this show look forward new season I cannot wait next year. I am dying laughing so funny I love it and enjoy it. Never missed any episode of it’s worth binge watching.

It surprised me I actually liked it. I was a little unsure of the concept but I liked all the cast members, I gave it a shot. They made it work it was good and funny.

Love the Upshaw’s happy about season 2!!