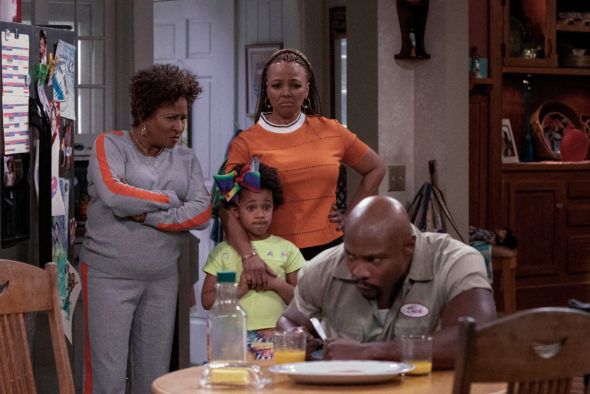 Can the family keep it together? Has The Upshaws TV show been cancelled or renewed for a second season on Netflix? The television vulture is watching all the latest cancellation and renewal news, so this page is the place to track the status of The Upshaws, season two. Bookmark it, or subscribe for the latest updates. Remember, the television vulture is watching your shows. Are you?

Streaming on the Netflix subscription service, The Upshaws TV show stars Wanda Sykes, Mike Epps, Kim Fields, Page Kennedy, Diamond Lyons, Khali Spraggins, Jermelle Simon, Gabrielle Dennis, and Journey Christine. It follows a working-class family in Indiana who struggles to make it work — and make it right — without the blueprint to do it. Bennie Upshaw (Epps) is the head of a Black working-class family in Indianapolis. He’s a charming, well-intentioned mechanic and lifelong mess just trying his best to step up and care for his family. He’s married to Regina (Fields) and they have three children together — daughters Aaliyah (Spraggins) and Maya (Christine) and son Bernard Jr. (Simon). Bennie’s teenage son Kelvin (Lyons), who is the same age as Aaliyah, has a strained relationship with his dad. He was conceived with Tasha Lewis (Dennis) when Bennie thought that he and Regina were on a break. There’s also sardonic Lucretia (Sykes), Regina’s older sister who doesn’t like Bennie but still provided money to open his garage. Through thick and thin, the Upshaws are determined to make it work, and make it to the next level, together.

Unless they decide to publicize viewership, it is difficult to predict whether Netflix will cancel or renew The Upshaws for season two. Since Netflix isn’t ad-supported, it can take a chance on series it believes in, but it comes down to production costs versus viewership numbers sooner or later. Generally speaking, Netflix TV shows which are going to be renewed are usually picked up within a month or so of the series or season premiere. I’ll keep my ears open and an eye out for news and update this page with breaking developments. Subscribe for free alerts on The Upshaws cancellation or renewal news.

6/25/21 update: The Upshaws has been renewed for a second season.

What do you think? Are you glad that The Upshaws TV show has been renewed for a second season? How would you feel if Netflix had cancelled this TV series, instead?