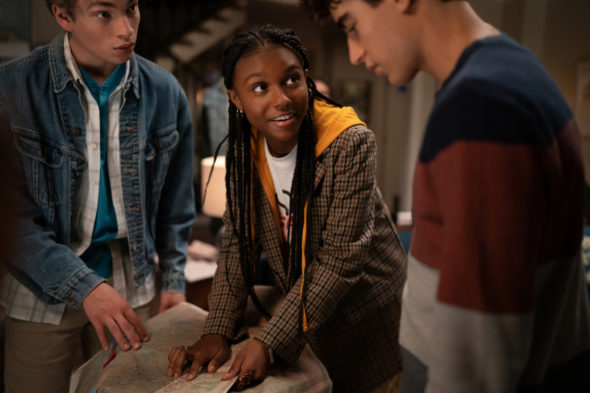 Naomi McDuffie’s adventure won’t continue into the 2022-23 television season. The Naomi TV show has been cancelled after a single season on The CW network. The final two episodes aired last night.

A superhero drama series, the Naomi TV show was developed by Ava DuVernay. It stars Kaci Walfall, Mary-Charles Jones, Barry Watson, Mouzam Makkar, Cranston Johnson, Alexander Wraith, Daniel Puig, Aidan Gemme, Will Meyers, and Camila Moreno. The story follows the journey of a smart, confident, and comic book–loving teenager named Naomi McDuffie (Walfall). She pursues her hidden destiny after a supernatural event shakes her hometown of Port Oswego to the core. While Naomi’s doting parents (Watson and Makkar) are concerned about their daughter’s strange new fainting spells, the teen’s closest friends — Annabelle (Jones), Nathan (Puig), Lourdes (Moreno), Anthony (Meyers), and Jacob (Gemme) — join Naomi to help uncover who or what is behind the unexpected event. A bit of sleuthing leads Naomi and her friends to discover that the owners of two local businesses — Dee (Wraith) and Zumbado (Johnson) — seem to know a lot more about the incident than everyone else. Soon, Naomi realizes that the mysterious event is just the beginning of a thrilling journey that will change her life and challenge her to question everything she knew to be true.

Airing on Tuesday nights, the first season of Naomi averaged a 0.08 rating in the 18-49 demographic and 522,000 viewers in the live+same day ratings (including DVR playback through 3:00 AM). In the live+7 day ratings, which includes a week of delayed viewing, the season currently averages a 0.20 demo and 981,000 viewers.

What do you think? Have you watched the Naomi TV show on The CW Are you sorry to hear that the series has been cancelled and won’t have a second season?

This show was awesome and should have been renewed. They even left it on a cliffhanger and set it up perfectly for a second season. Canceling one show wasn’t bad enough they have wiped them all out mostly I use to watch them all live for the crossover every year even buy all the DVD’s the CW is done now only 2 shows left that I will watch so when those get the ax it’s R.I.P. CW

All the good shows enjoyable mindless on CW are canceled
All the reality dance shows are boring and being renewed
I guess it will be only Netflix and HBO to watch.

Hold on now, let’s not get carried away.

I really wanted to see where this show was going. Too bad.

CW sure has a heck of a lot of shows!! The only types of shows that seem to be on anymore are reality shows. To me, those are the most stupidest shows ever!!! CW,you use to my best channel, but I’m changing my mind really fast!!!! You’re cancelling too many shows….. Please don’t add reality shows!!!!!!!!!

So they have cancelled the good Arrowverse shows and left us with Superman & Lois (which is okay) and Flash (which has been absolute tosh for 2 seasons)?

Another poor CW DC Production bites the dust. Not surprising when more people worked on the thing, than watched it. Now Discovery own Warner’s, the days of getting a free ride because of diversity are over. From now on shows will have to be popular outside of twitter to get renewed.

Thoughts & Prayers, it was one of the better CW comedies.

Are you kidding me???? This should’ve been renewed.