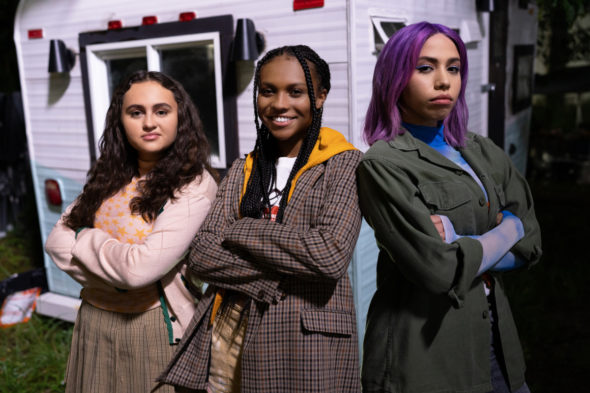 TV show description:
A superhero drama series, Naomi is based on the DC comic book series by Brian Michael Bendis, David F. Walker, and Jamal Campbell. The show was developed by Ava DuVernay.

The story follows the journey of a cool and confident, comic book–loving teenager as she pursues her hidden destiny. When a supernatural event shakes her hometown of Port Oswego to the core, Naomi (Walfall) sets out to uncover its origins — with a little help from her fiercely loyal best friend, Annabelle (Jones). Naomi also has the support of her adoptive, doting parents — veteran military officer Greg (Watson) and linguistics teacher Jennifer (Makkar).

After an encounter with Zumbado (Johnson), the mysterious owner of a used car lot, leaves Naomi shaken, she turns to Dee (Wraith), a tattoo parlor owner, who becomes her reluctant mentor.

While unfolding the mystery about herself, Naomi also effortlessly navigates her high school friendships with kids on the military base as well as with local townies. They include ex-boyfriend and high school jock Nathan (Puig); Annabelle’s longtime, loyal boyfriend Jacob (Gemme); proud “townie” Anthony (Meyers); and fellow comic book enthusiast Lourdes (Moreno), who works in a vintage collectible shop.

As Naomi journeys to the heights of the Multiverse in search of answers, what she discovers challenges everything we know about our heroes.

Series Finale:
Episode #13 — Who Am I?
Naomi (Kaci Walfall) must make a decision to protect those she loves most, but in the end, Naomi needs those closest to her to battle a powerful being that has been hunting her since birth. And while everyone has an opinion about what Naomi’s future should be, her greatest power will manifest only when she stops believing everything she once thought to be true…and chooses her own destiny.
First aired: May 10, 2022.

What do you think? Do you like the Naomi TV show? Do you think it should have been cancelled or renewed for a second season?

I was looking forward to season 2

Really enjoy this show and I’m 86 yrs young. So sorry it was canceled