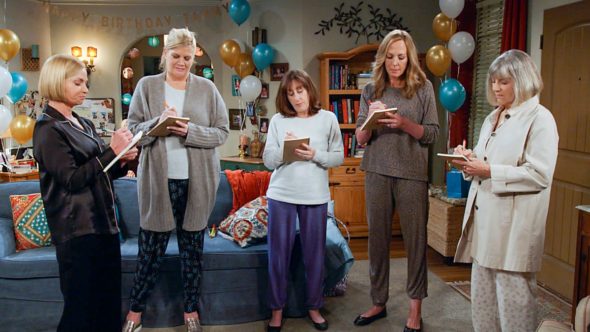 Can this group of ladies still bring the funny in the eighth season of the Mom TV show on CBS? As we all know, the Nielsen ratings typically play a big role in determining whether a TV show like Mom is cancelled or renewed for season nine. Unfortunately, most of us do not live in Nielsen households. Because many viewers feel frustrated when their viewing habits and opinions aren’t considered, we invite you to rate all of the eighth season episodes of Mom here. *Status Update Below.

A CBS comedy series, Mom TV series stars Allison Janney, Mimi Kennedy, Jaime Pressly, Beth Hall, William Fichtner, and Kristen Johnston. In season eight, recovering addict Bonnie (Janney) must learn to adjust to life without her daughter and former-roommate, Christy (Anna Faris), around. With a chaotic past behind her and a newly empty nest, Bonnie focuses on her marriage to her husband, Adam (Fichtner), and on what she wants to be now that she’s finally grown up. Now more than ever, Bonnie depends on the support of her friends, including wise Marjorie (Kennedy), wealthy and sometimes misguided Jill (Pressly), overly emotional Wendy (Hall), and her foster sister, Tammy (Johnston), who was recently released from prison. Collectively, these women help each other overcome their mistakes and stay sober in the face of whatever life throws at them.

What do you think? Which season eight episodes of the Mom TV series do you rate as wonderful, terrible, or somewhere between? Do you think that Mom should be cancelled or renewed for a ninth season on CBS? Don’t forget to vote, and share your thoughts, below.

*2/17/21 update: Mom is ending so there won’t be a ninth season for this CBS comedy series.

This show is the real deal and is one of my favorites! Please bring it back! It makes me laugh and makes me cry! My husband and I love it!

The last episode left so much unfinished in my opinion. Very poor ending for such a great cast who all put so much of themselves into it for so long! They deserved more than that,as did the viewers who loved the show for so long. Really sad.

Why would you cancel Mom it is a amazing show it’s really life to some people that has had alcohol and drugs related problems!! The show could make it with out Christy.. it’s still funny and positive IMPACT on people life.. like someone else has said CBS is canceling all the wrong shows

Why does CBS keep canceling the Best Shows??? Like MOM, Criminal Minds….
They should get rid of Clarice and Seal team!!!
You are getting it all wrong CBS! I think I’ll start watching another network!!
Sad, very sad! Mom was excellent and so was Criminal Minds!!!!

someone who knows about the navy, “Seal Team” is a show worth watching but agree about clarice

What is actually going on with so many really bad sitcoms coming on ,I try them and I am dead bred so it lasts one maybe 2 episodes before I say no more. WHY cancel a TOP NOTCH show like Mom? So many of us asking you to find some way to keep it going! This show does not revolve around Ana Ferris anymore! This wonderful group of ladies can more than carry this show for along time to come!!!!

I totally agree with you! I just found this spot. I loved The Big Bang Therapy & it was still getting high ratings. Jim Parsons wanted to move on but there were other great characters that could have been followed. They could have had them move away but stay in contact (pretend). Now they have canceled Mom & we won’t know what happens to Adam and we won’t see Jill & Andy as they start a family. We’ll never know what happened to Roscoe & Violet. They could have brought them back, (one or both). If Adam survived, he &… Read more »

Sad for it to end
One of favorite shows!!!

Please renewal. Love this show n cast . I’d watch it on another station if one would pick it up . And get Cristy to come back .

Good idea, Last Man Standing did that, new station. However,  DO NOT REPLACE CHARACTER WITH ANOTHER ACTOR!!! And could you please give Wendy a more visible backbone. Nurses are much too strong to only be depicted as a “weeping Wendy.” I just knew that would change Post COVID.  We saw a glimpse of her strength and strength of character when she lived the pain of feeling like she was playing God. We have seen minute glimpses of her strength or potential points of interest to expand upon in past. Gift exchange when Christy discovered possible link to mob family and… Read more »

We love all the characters! Miss Christy though. Perhaps she will come home someday…Chuck Lorre shows rock!

One person leaving the show is in my mind not enough reason to end a really great show with a very strong remaining cast. Cancelling this show is a huge mistake!

How very true,, Christy did not alone make the show a hit.. It was all about this wonderful group of women who together conquered alcohol addiction. These women can prove to others that it is possible.especially with friends who are as loving, and caring as they are.. Please do not cancel this show.

Please don’t cancel Mom! It’s the only show on TV that actually makes me laugh. It’s also serious when it needs to be. Pretty spot on about people struggling with addiction. We need to keep good comedy on TV and LESS stupid reality TV. We also need more Rudy and Andy.

Absolutely,,, this show is not only funny but encouraging to many that all things are possible,, Please to not cancel,,