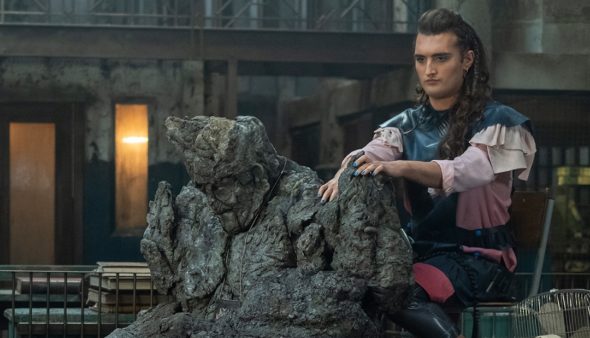 Is this team of misfits up to the challenge in the first season of The Watch TV show on BBC America? As we all know, the Nielsen ratings typically play a big role in determining whether a TV show like The Watch is cancelled or renewed for season two. Unfortunately, most of us do not live in Nielsen households. Because many viewers feel frustrated when their viewing habits and opinions aren’t considered, we invite you to rate all of the first season episodes of The Watch here.

A BBC America fantasy police procedural series, The Watch is inspired by the Discworld novels by Sir Terry Pratchett. The cast includes Richard Dormer, Lara Rossi, Adam Hugill, Marama Corlett, Jo Eaton-Kent, Wendell Pierce, Samuel Adewunmi, Matt Berry, Anna Chancellor, and Bianca Simone Mannie, with James Fleet, Ralph Ineson, Hakeem Kae-Kazim, Paul Kaye, Ruth Madeley, and Ingrid Oliver. Set in the fictional Discworld’s principal city of Ankh-Morpork, the story follows an unlikely group of misfits called The City Watch. They are forced to find the courage to save the world and surprise even themselves in the process. The series pits trolls, werewolves, wizards, and other improbable heroes against an evil plot to resurrect a great dragon which would lead to the destruction of life as they know it. Characters include leader Sam Vimes (Dormer); the last scion of nobility, Lady Sybil Ramkin (Rossi); naïve but heroic Constable Carrot (Hugill); mysterious Corporal Angua (Corlett); ingenious forensics expert Constable Cheery (Eaton-Kent); and the voice of Death (Pierce).

What do you think? Which season one episodes of The Watch TV series do you rate as wonderful, terrible, or somewhere between? Do you think that The Watch should be cancelled or renewed for a second season on BBC America? Don’t forget to vote, and share your thoughts, below.

Series was a little slow to warm up to but the quirky characters and unique feel the show extrudes really made it one of the pleasent surprises by the end of season one! The quirky characters and offhanded humor kept me coming back for more. Please pick up this show as it really has a lot offer with all it’s quirkiness that distinguishes it from any other show. Bring it back where it belongs!

To quote sir pTerrys daughter: “Look, I think it’s fairly obvious that @TheWatch shares no DNA with my father’s Watch. This is neither criticism nor support. It is what it is.” The only reason this has any connection to Discworld is because they wanted an already existing fanbase they could get money from. Simon Allen used every opportunity to distance his product from the source material, and that was a smart move, because this is so far below Pratchetts work quality wise that it doesn’t survive the comparison. Treated as its own entity, well, it’s a boring, disjointed mess of… Read more »

As a discworld fan, I was curious. although it is an adaption it has lots of prachet’s characters and humor. it was fun tot watch the watch.
I actualy missed the capitals when death was talking (in the subtitles).
I am an non native english speaker, I use the subtitles when it not clear what they are saying.
This show can grow, more seasons please!!

My wife & I feel the same way. Although an adaptation it was still fun to watch “The Watch” we hope is brough back and also many more of Sir Prattchett’s books made into movies

As a fan of all things Discworld, it was with a little scepticism I decided to give this new series a watch.
I was very pleasantly surprised and ended up watching all eight episodes back to back. If not taken as an adaptation but more a bow to the late Terry Pratchett’s work its fantastic and I enjoyed every episode.
More please.

Although adapted from the original books, this quirky show was very appealing and fun. It’s more than overdue to turn Discworld into a screen experience. Loved it in its own right!

Other shows are in the works, Good Omens Season 2, The Amazing Maurice, The Abominable Snow Baby. Maybe The Watch will follow or maybe it will be a show about Rincewind, The Witches, Death or Moist.

I loved this show. I hope there is season 2 to wrap up the cliff hanger ending. The characters are very appealing and strangely relatable.

unusual, hilarious, strange, touching, surprising, on the edge of my seat!!! I love death! I love all of the characters. Felt like family! ha ha ha ! I dont normally watch things over and over again, but I watch The Watch. Wha?

I loved this fun, engaging and unique show. The characters were different from most shows adding interest to the story. Please do not cancel

When I compare this with Dr Who, I say… yes, more please. I love surprises. This show does it and it makes me laugh. I hope that it is given a chance.

Hello please do not cancel the show as i think it is refreshing and something that is needed to take you away the pain and frustration of everyday life on other covid-19 pandemic and i think that the show could go for a long time if it is given a chance to run don’t listen to all the naysayers as they probably watch the stupid reality shows like the bachelor and temptation Island and survivor and all this other crap! THIS SHOW is refreshing and new and deserves a chance to run it’s course please keep it running for posterity… Read more »