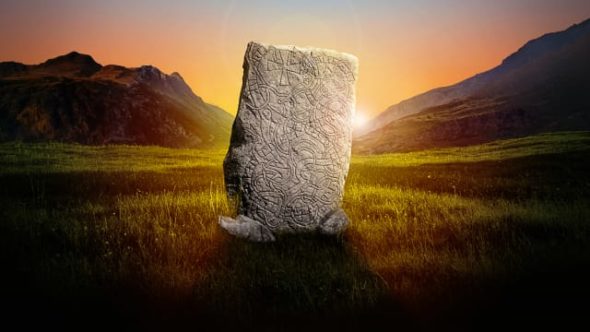 In addition, the cable channel has announced premiere dates for three existing series — Secrets of the Viking Stone (above, season two), Strange Evidence (season five), and What on Earth? (season nine).

Here are premiere dates and additional information about the series:

Below are upcoming series launching in February and March on Science Channel. From odd anomalies caught on camera, to secrets from history that have haunted scholars to ancient mysteries that have come to light, the line-up of new SCIENCE CHANNEL premieres leave no questions unanswered.

SECRETS OF THE VIKING STONE – Premieres Sunday, February 21 at 10pm ET/PT
After getting the go-ahead from the State of Minnesota to begin excavation with the archaeological team at Runestone Hill where the Kensington Runestone is believed to have been found in 1898, Peter Storemare and Elroy Balgaard are that much closer to solving the mystery that has enraptured scholars and fervent theorists for decades. An all new season of SECRETS OF THE VIKING STONE premieres February 21.

STRANGE EVIDENCE – Premieres Thursday, March 4 at 9pm ET/PT
In an all new season of STRANGE EVIDENCE, experts turn to the bizarre and inexplicable anomalies caught on camera and use new forensic analysis to determine the truth behind them. Looking to mysteries such as an ape-like humanoid chasing after a car full of teenagers in Russia, a mysterious low-flying spinning object passing over a house in England, and an eerie blue light illuminating the night sky in Madrid, these oddities from around the world seem to defy all logic.

WHAT ON EARTH – Premieres Thursday, March 4 at 10pm ET/PT
Thousands of advanced satellites and drones orbit Earth, invisible to us yet scanning every inch of our planet. They capture our world in unprecedented detail, revealing areas that until now have remained a mystery. In an all new season of WHAT ON EARTH, experts look to this state-of-the-art imaging technology to discover bizarre phenomena and strange mysteries including an inaccessible cave of bones on an island off the coast of Africa, a bizarre concrete structure sitting off the coast of the Baltic sea, and a crater in Mexico with extra-terrestrial connections.

What do you think? Do you like the Science Channel programming? Do you plan to watch any of these shows?

Love the show ‘Secrets of the Viking Stone’. I’m excited to go with them on this adventure to find the answers about the stone.

Hire an English editor for your narrators!
It’s AN not A following a word which starts with a vowel. They come off stupid!

It’s Per- not Pur/Per for PRE-vent, not PerVent!

But most of all…

Dear God! For – Forget! Not Fer, not Ferget!

It’s embarrassing! You’re an educational channel. Hire AN English professional editor to help you with your narrators. I’m sure you pay them enough, so pay them to ProNounce words correctly!