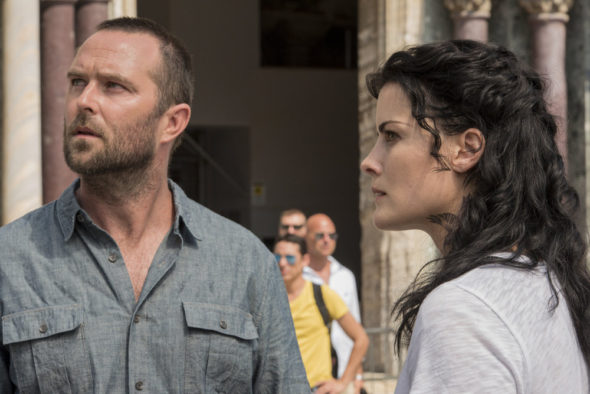 On Instagram, Stapleton posted a photo from the last day of shooting Blindspot‘s third season:

With season three wrapped, it’s unclear if NBC will renew Blindspot for a fourth. Ratings have fallen for the thriller over the past couple seasons and season three is currently averaging a low rating of.65 in the 18-49 demo with 3.403 million viewers.

What do you think? Do you watch Blindspot? Would you watch a fourth season?

This show is on my must watch list. Please keep it going.

Please give me more — I watch faithfully every week. I want more. I LOVE her!

Love watching Blindspot hope there is another season to watch soon

This show is awesome and we definitely need another season!
Love from Sweden

Hi again. Sorry for terrible English,ny phone lives ut ones lifeLets try again:
We love Blindspot,ut is a genious and exiting show,who really has it all.!!
I know I speak for many people in Norway,and de would be so dissapointed if it all ends at third season. Please,keep the great work up!!
De all chear for you,and love the show.