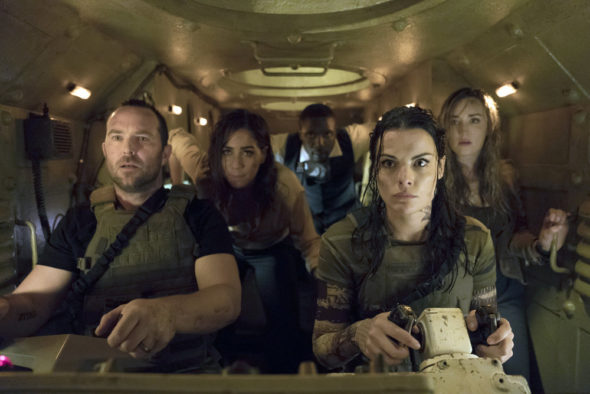 Has Jane Doe’s odyssey reached its end? Is the Blindspot TV show cancelled or renewed for a fourth season on NBC? The television vulture is watching all the latest cancellation and renewal news, so this page is the place to track the status of Blindspot, season four. Bookmark it, or subscribe for the latest updates. Remember, the television vulture is watching your shows. Are you?

Airing on the NBC television network, Blindspot stars Sullivan Stapleton, Jaimie Alexander, Rob Brown, Audrey Esparza, Ashley Johnson, and Luke Mitchell. After amnesiac “Jane Doe” (Alexander) is found in Times Square, FBI Agent Kurt Weller (Stapleton) and his team work to decipher her intricate tattoos. Despite a web of conspiracy and corruption, they begin to uncover the clues therein, as well as Jane’s identity. The third season kicks off 18 months after the events of the season two finale. Although they parted ways thanks to a series of mysterious circumstances, the team must reunite to handle a new crisis.

The third season of Blindspot averaged a 0.61 rating in the 18-49 demographic and 3.26 million viewers. Compared to season two, that’s down by 41% and 33%, respectively. Find out how Blindspot stacks up against other NBC TV shows.

Will NBC cancel or renew Blindspot for season four? The ratings have been quite poor but I think it will score a renewal, so they will have a good sized syndication package. I reserve the right to change my mind though, as more data becomes available. For now, I’ll keep an eye on the ratings and update this page with breaking developments. Subscribe for free updates on any Blindspot cancellation or renewal news.


What do you think? Are you happy that the Blindspot TV show has been renewed for a fourth season? How would you feel if NBC had cancelled this TV series, instead?

Loved this show! This season sucks.

One of the best shows on TV . If the show gets canceled I am done with NBC .

I wish they would hurry with season 4

I am totally addicted to Blindspot, can’t wait for series 4

I’m so Please they have gathered all this Amazing Artist on a twisted, Bizarre situation that keeps everyone wander what is the outcome. It is Clever you guys. Many gratitude for keeping us entertained. I Luv all the cast, their awesome actors. I’m a Fanatic Blindspot lover! Cant wait for the next Season to come….

Blindspot is a great show with lots of on edge drama.. however they have gotten so far away from taking down the bad guy and into relationship drama that it is almost like a soap opera.. follow the tattoos…..

I LOVE the show BLINDSPOT..It always had me on edge,ready for the next show..wish I could look at it ALL Day EVERY Day…Great Show..