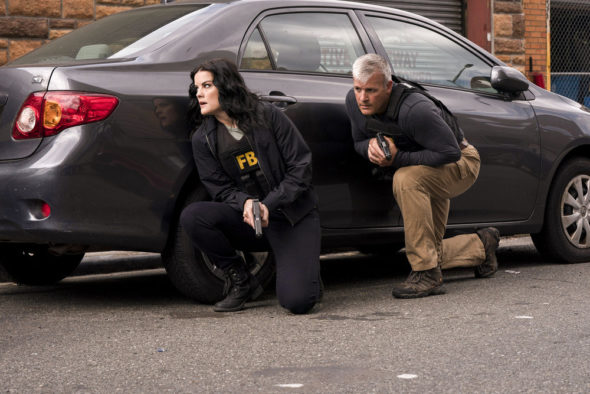 Is Jane Doe’s journey at its end? Has the Blindspot TV show been cancelled or renewed for a fifth season on NBC? The television vulture is watching all the latest cancellation and renewal news, so this page is the place to track the status of Blindspot, season five. Bookmark it, or subscribe for the latest updates. Remember, the television vulture is watching your shows. Are you?

An NBC action thriller, Blindspot stars Sullivan Stapleton, Jaimie Alexander, Rob Brown, Audrey Esparza, Ashley Johnson, and Ennis Esmer. After amnesiac “Jane Doe” (Alexander) is found in Times Square, FBI Agent Kurt Weller (Stapleton) and his team work to decipher her intricate tattoos. Despite a web of conspiracy and corruption, they begin to uncover the clues therein, as well as Jane’s identity. As season four of the crime drama kicks off, the FBI team hunts a dangerous enemy operative, and a deadly new foe emerges.

The fourth season of Blindspot averaged a 0.46 rating in the 18-49 demographic and 2.78 million viewers. Compared to season three, that’s down by 24% and 15%, respectively. Find out how Blindspot stacks up against other NBC TV shows.

Will NBC cancel or renew Blindspot for season five? Based on last year’s performance, it could easily have been cancelled. Instead, it was renewed after the network negotiated a reduction in its licensing fee, so that it would remain profitable. It almost always comes down to money, so a fifth season renewal will depend in part on whether Warner Bros. and NBC can come to a deal that makes more sense than selling a somewhat smaller syndication package. Recently, NBC pulled the series for May sweeps so that may be a sign that the show is done. I’ll update this page with any new breaking developments. Subscribe for free updates on any Blindspot cancellation or renewal news.

What do you think? Should the Blindspot TV show have been renewed for a fifth and final season? Had it been up to you, would you have cancelled this NBC TV show, or would it continue even longer?

If they hadn’t moved it back and forth they ruined it..Fridays was fine but Blue Bloods hard to compete with. I expected at least 8 seasons…A cast like Blindspots was a breath of fresh air. Am pissed at greedy people its always about money screw the fans. Best show ever shame on the top people I hope they all come back to do something else together under a different network to snub their bosses who didn’t fight for them. Such a magical cast thank god its on my Roku like other classics I will keep binge watching Blindspot.

i agree we need closure and blowing up the team is not it!

Please, please keep Blindspot on. Keep it long enough to bring closure and a sensible ending to all of the characters and storylines that are open as of the last show in 2019.

My husband and I are just finishing season 3 we are watching on hulu and we are getting nervous that we will run out of episodes, really enjoying it please don’t just stop in the middle of a story let us know how everyone ends up, or why should we even start season 4

Yes, Blindspot should be renewed and continue. Great story and very enjoyable to watch. Please keep this series going.

Love this show! I would’ve been so sad if it didn’t come back!

I don’t know why when there’s a great show that has the story line to continue on is threatened. Is it because of the thought the there is a true story out there. The actors are really great and I know everyone moves on to different things and places. Please don’t cancel. It’s really hard to get a show that doesn’t leave you wanting to see what else is new.

Please do not cancel Blindspot!! I love the show, and there is so much more to explore with the characters. Ya left us hanging with an explosion in the cabin!!!! When does it come back on???? I can,t wait!!!!

Please do not cancel Blindspots. My husband got me interested in it and I have fallen in love with the show. I have my ideas how they get out of that cabin. I simply can not wait for it to come on again. Just tell me when and where.

I love it. I have been watching from day one. There are parts that willl blow your mind.. Can’t wait to see more. Please . Dont ever take it off…