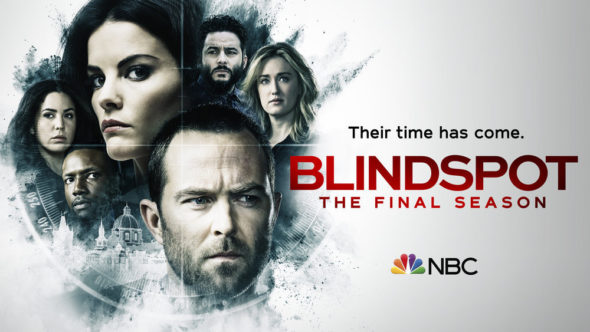 Despite having some devoted fans, Blindspot has never been a big hit in the ratings for NBC. The series could easily have been cancelled a few times but, viewers don’t have to worry this time around. The show is coming to a planned end and will have a series finale. Will the final episodes drive the ratings upward to new highs so the execs regret not ordering season six or, will the numbers fall even lower than before? Stay tuned.

An action-thriller series, Blindspot stars Sullivan Stapleton, Jaimie Alexander, Rob Brown, Audrey Esparza, Ashley Johnson, Ennis Esmer, and Mary Elizabeth Mastrantonio. After amnesiac “Jane Doe” (Alexander) is found in Times Square, FBI Agent Kurt Weller (Stapleton) and his team work to decipher her intricate tattoos. Despite a web of conspiracy and corruption, they begin to uncover clues, as well as Jane’s identity. In the fifth and final season, the team is on the run. Jane and the surviving members of the former FBI taskforce race against the clock to clear their names.

For comparisons: Season four of Blindspot on NBC averaged a 0.46 rating in the 18-49 demographic and 2.78 million viewers.

What do you think? Do you like the Blindspot TV series on NBC? Should it have been renewed for a sixth season?

NBC should have renewed BLindspot… It was getting interesting…I hope they change their mind about cancelling the series.. Thank you…

This has been a great and intriguing series. I do not want it to end, it would be a shame to let these talented actors/actresses move on to something else. The series just cant be over, please rethink your decision.

Would love to see a sixth season. Writers have kept the chapters interesting and feel there is more to come.

The show is getting increasingly bad, used to love it.