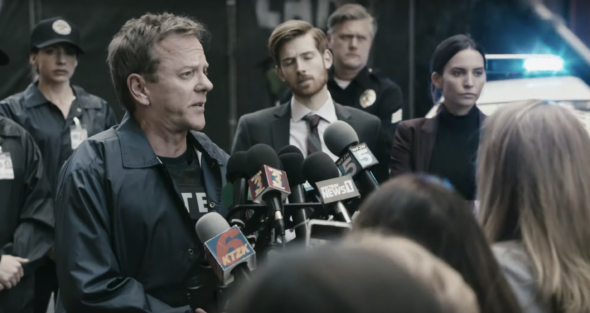 “I’ve been set up.” Quibi just released a new trailer for their upcoming reboot TV show, The Fugitive.

Based on the 1960s series, the thriller stars Boyd Holbrook as “an innocent man on the run, desperate to clear his name, [who] is chased through Los Angeles by the cop who will not rest until he is captured.” The cast also includes Kiefer Sutherland, Natalie Martinez, Tiya Sircar, Brian Geraghty, Genesis Rodriguez Glenn Howerton and Keilani Arellanes.

The Fugitive debuts on Quibi on August 3rd.

Check out a sneak peek below:

What do you think? Are you a fan of the original Fugitive TV show? Will you watch the Quibi reboot?

Look good hopefully like 24 love that show so good,

I loved it!!!! It was a thriller and Keifer was amazing just like his role in 24. I’ll watch a second season in one night.

Hope it’s better than the Tim Daly reboot of 2000.

Looks good…. yes, I have watched the original in reruns….. I will watch this “newer version”…. good luck, and “break a leg”. ✌

Loved the original show & the movie. This will take more than 24 hours for Kiefer though.