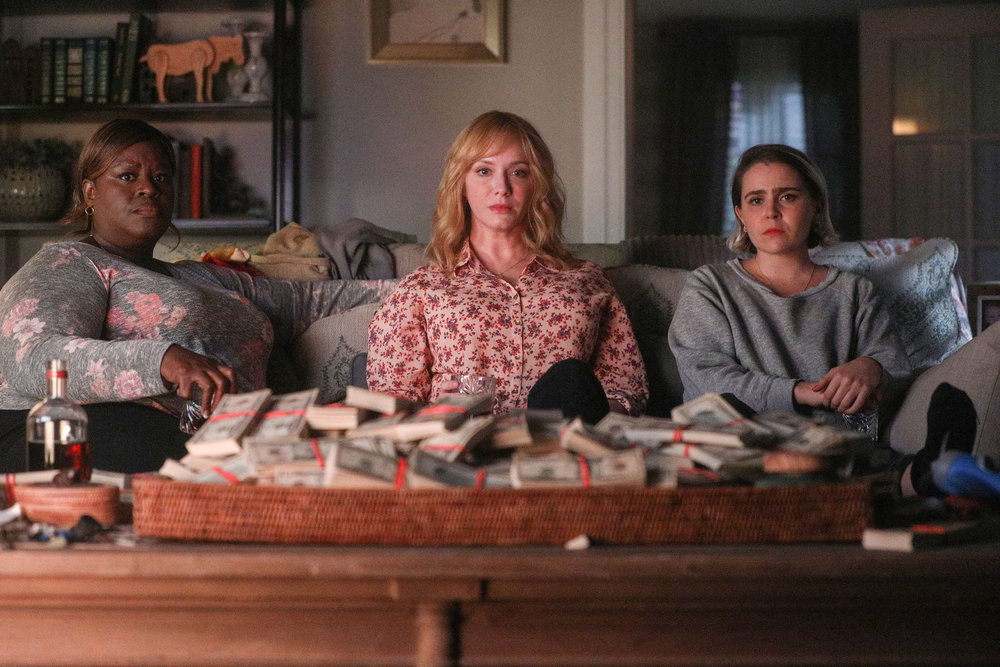 How low can the ratings go? Has the Good Girls TV show been cancelled or renewed for a fourth season on NBC? The television vulture is watching all the latest cancellation and renewal news, so this page is the place to track the status of Good Girls, season four. Bookmark it, or subscribe for the latest updates. Remember, the television vulture is watching your shows. Are you?

Airing on the NBC television network, Good Girls stars Christina Hendricks, Retta, Mae Whitman, Reno Wilson, Manny Montana, Lidya Jewett, Isaiah Stannard, and Matthew Lillard. The TV series centers on three suburban moms who’ve struggled to get by. They hold up the local Fine & Frugal supermarket, but their take far exceeds their expectations and find themselves in deep trouble with the local crime boss. In season three, the ladies each take on seemingly innocent jobs but each has a special purpose to aid them in their new criminal enterprise.

The third season of Good Girls averaged a 0.42 rating in the 18-49 demographic and 1.84 million viewers. Compared to season two, that’s down by 23% in the demo and down by 21% in viewership. Find out how Good Girls stacks up against other NBC TV shows.

Will NBC cancel or renew Good Girls for season four? The show has never attracted big ratings but the peacock network keeps renewing it anyway. The low ratings trend continues in year three but, I suspect that there will be a fourth season anyway. I’ll update this page with breaking developments. Subscribe for free alerts on Good Girls cancellation or renewal news.

What do you think? Are you glad that the Good Girls TV show has been renewed for a fourth season? How would you feel if NBC had cancelled this TV series, instead?

Please renew Good Girls! It has a huge fanbase. We may not have all been able to watch on Sunday night but we watched on the NBC app and Hulu. I work Sunday nights but I always watched first thing Monday morning. It’s my favorite show!! Please don’t cancel it! We love our Good Girls…and guys.

I will not be too disappointed if the show gets cancelled. This season was not very good in fact it was a last resort watch. If they renew hopefully they will get better writing and a better story line. If they don’t get creative, there is nowhere to go but down. If the whole idea was to watch these moms rise to power and get ahead then they are failing miserably. This whole season has been about them being controlled by fear and by a man. Where are the fierce, courageous characters from season one?

I will be absolutely devastated if they cancel this show! I watch the day after the episode airs on Hulu religiously every week really hoping for a season 4!!! Love these characters and their story

Please renew! However, we need to have more sexual tension between Beth and Gang friend! There was not enough of him in the third season. I really liked Andrew McCarthy playing a bad guy too! More please!!!

I will be devastated if it is not renewed for a fourth season!! It’s so good!!

I hope it gets renewed. It is too good!

love this show. Cant wait to see what happens next

i love this show.

They better renew Good Girls! The ratings are down because some decided to take the first 3/4 of the season into a dark, serious side. Making Rio a cold heart jerk instead of keeping the show light, funny and a bit of serious. It’s picking up again. Of course we all love the Brio, that’s what we want. Keep it on. Please.

I’ll be sick if it doesn’t get renewed! What a cast⭐ maybe there streaming it? What reason would there or could there be for lower ratings? I know I cancel the DVR because I’m watching live, does this cause a problem?

This is the only show I watch on network TV. It is so “good” I am surprised the ratings are nit higher unless the true audience isn’t captured by the rating system used. I am addicted to this show. Can’t get enough! Please renew for a Season 4 or I will sink into a deep depression!!!

My husband and I love this show. Please do not cancel

I honestly think this show is so much fun to watch. Seeing the ladies get into trouble & then find a way to get out of trouble is great!