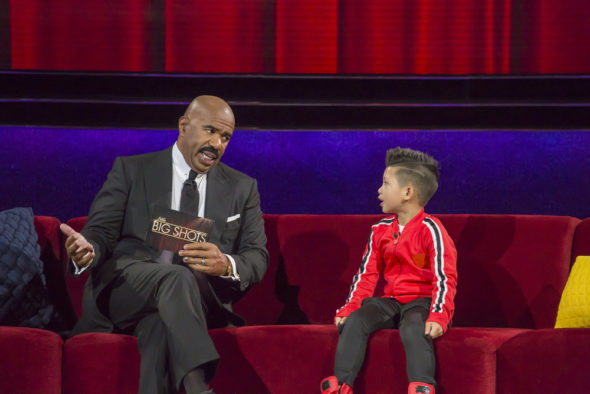 Steve Harvey and his young friends are coming back to the peacock network. NBC has announced that their Little Big Shots TV show will return for its third season on Sunday, March 18th. A pair of episodes will begin airing at 7:00 pm. The following week, March 25th, the series will air in the 8:00 pm hour.

Little Big Shots was one of NBC’s highest-rated unscripted shows in its first season but the ratings dropped by more than 30% in season two. Will the numbers keep falling? We’ll have to wait and see.

Here’s the premiere announcement from NBC:

NBC’s hit series “Little Big Shots” returns for season three on Sunday, March 18 (7-9 p.m., its normal 8-9 p.m. timeslot begins March 25) with more talented and unique kids from all over the U.S. and the world. Steve Harvey hosts the feel-good, family-friendly series, executive produced by Harvey and Ellen DeGeneres, and goes toe to with them in hilarious conversations and interviews.

Viewers will be treated to never-before-seen acts, including everything from a soap bubble artist, pint-sized aerialists, a golf prodigy and the world’s strongest kid, as well as remarkable young experts in astronomy, mathematics and archaeology. Adding to the fun will be kids who are incredibly gifted in music – ranging from pop to opera and country to classical, and on instruments that include the ukulele, drums, piano and more.

“Little Big Shots” will also showcase kids who took the Internet by storm with viral videos, guaranteeing lots of comedy and surprises in this engaging series that celebrates phenomenal children from all over the globe. In addition to kids from the United States, season three will also feature talented tykes from Ethiopia, India, Russia, Ukraine, Spain, Germany, England, Ireland, Scotland, Canada, and the Philippines.

What do you think? Do you like the Little Big Shots TV show on NBC? Do you plan on watching the third season?

WILL NEVER WATCH IT AGAIN. WITHOUT STEVE HARVEY IT IS NOTHING. GOOD LUCK WITH THAT IDIOTS.

There is NO other show offering great kids who do great things. Why would a network not renew??

SO Ready for Little Big Shots!!
It’s been off, too long. Everyone we know, watched it! We Never missed it.
“Our world” Stopped to Run to TV & watch “Little Big Shots”!! We were SHOCKED when it was removed from the schedule!
Couldn’t understand that something so good & enjoyed by So Many
Ages, could come to sudden end!

Would love to schedule taping the show. But cannot find it in the listings on NBC. Steve Harvey is great! Love watching all of his shows!