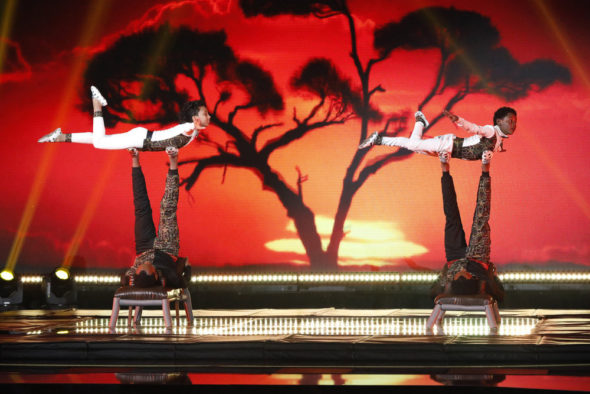 Do talented kids still have a home on the Peacock Network? Has the Little Big Shots TV show been cancelled or renewed for a fourth season on NBC? The television vulture is watching all the latest cancellation and renewal news, so this page is the place to track the status of Little Big Shots, season four. Bookmark it, or subscribe for the latest updates. Remember, the television vulture is watching your shows. Are you?

An NBC children’s talent show, Little Big Shots features host Steve Harvey having light-hearted chats with gifted little ones, who exhibit a wide range of talents. Season three acts include a soap bubble artist, pint-sized aerialists, a golf prodigy, and the world’s strongest kid. Also featured are young experts in astronomy, mathematics, and archaeology. There are also musically gifted children, performing everything from pop to opera and country to classical, and on instruments that include the ukulele, drums, piano, more.

The third season of Little Big Shots averaged a 0.82 rating in the 18-49 demographic and 6.05 million viewers. Compared to season two, that’s down by 41% and 30%, respectively. Find out how Little Big Shots stacks up against other NBC TV shows.

Will NBC cancel or renew Little Big Shots for season four? The ratings are way down but I suspect that it will still end up being renewed. I’ll update this page with breaking developments. Subscribe for Little Big Shots cancellation or renewal alerts.

5/13/2019 Status Update: Little Big Shots has been renewed for season four, but Steve Harvey is out, and there’s a new host. Details here.

What do you think? Are you happy Little Big Shots was renewed for a fourth season? How would you feel if NBC cancelled this TV show, instead?

A true family show that I like watching with my grand children!

I really enjoyed watching Little Big Shots, ,but Steve Harvey being replaced by Jenny McCarthy it won’t be the same. Steve made that show. I hate when they mess with a good show. If it’s not broken.. leave it alone.