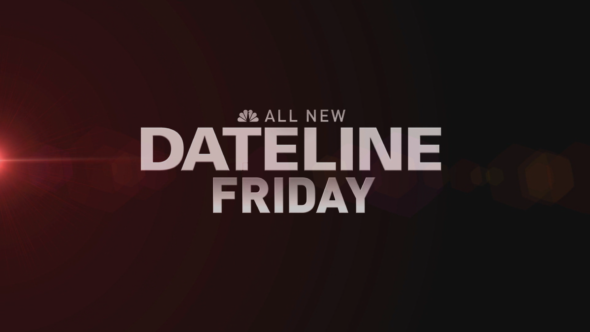 If it’s a Friday night, Dateline must be on television. To no surprise, NBC has renewed the venerable newsmagazine series, Dateline, for a 28th season. It will air as part of the 2019-20 season.

The program was one of the first network programs to air on multiple nights in one week. The 2018-19 season has been no different. It’s an anchor of the Friday and Saturday night line-up (the latter airing as Dateline Weekend Mystery). Installments of Dateline have also aired on Sunday nights this season and, starting later this month, episodes will begin running on Mondays at 10 PM.

The Friday editions of the 27th season of Dateline NBC are averaging a 0.56 rating in the 18-49 demographic and 3.31 million viewers. Compared to the Friday episodes of season 26, that’s down by 27% and 25%, respectively.

What do you think? Do you watch the Dateline series on NBC? Will you be watching season 28 next fall?

I Always watch Dateline! I love love love it! I plan my evenings around it.

Now that NBC’s best journalistic talent Natalie Morales is back in the correspondents’ fold I will start watching again.

I have been watching Dateline since the very beginning and never miss an episode! I would be lost on my weekends without it! We actually discuss the cases over Sunday dinner as many members of our family watch it,makes for some great discussions.I will be watching as long as it is on the listings and I hope that continues to be many years!