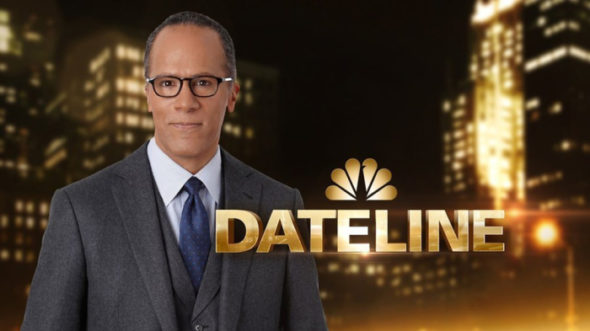 This isn’t surprising news — Dateline is staying on the airwaves. NBC has confirmed they’ve renewed the TV show through the 2020-21 season.

The Friday editions of the 28th season of Dateline NBC average a 0.56 rating in the 18-49 demographic and 3.59 million viewers. Compared to the Friday episodes of season 27, that’s down by 1% in the demo and up by 7% in viewership.

What do you think? Do you watch Dateline on Friday nights? Will you watch the upcoming season of this NBC series?

I am a regular watcher and surely would miss the show, one of my favorites. Missed the ending of this week”s show, “Footprint in the Dust ” which my programmed episode ended several minutes too soon before its ending and was cancelled-taking off too soon from here before I were able to watch it. Very disappointing.

I love date;one and would hate to see it cancelled!

Yes I just watched episode tonight 6/19/20 on wrongful murders cases/ cases period. It was very heartwarming to see this family reunited. My prayers & blessings goes out to them. I have family/ bro that’s been dealing with this same problem for over 10 years & they caught the guy who actually committed the crime not long after they locked him up but they won’t release him. He/ we don’t have the money for a good lawyer to defend him. The one he was consulting with keep telling him they not gone do the appeal. It would be a blessing… Read more »

Please don’t cancel. It’s my favorite real time show and I look forward to it every weekend. Thanks…