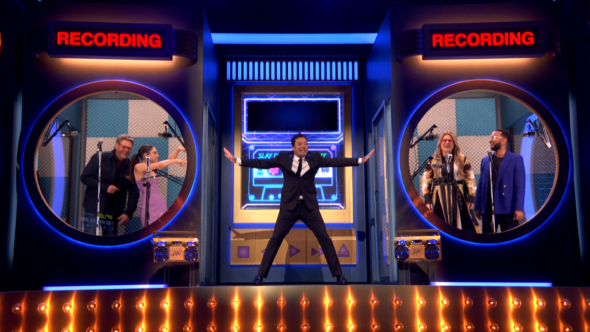 The beat goes on for That’s My Jam. NBC has renewed the competition series for a second season.

A comedy-variety game show, the That’s My Jam TV series is hosted by Jimmy Fallon and based on segments from The Tonight Show. Each episode of the feel-good series features two teams of two celebrities who are competing to benefit a charity of their choice. They take part in musical performances as well as dance, trivia, and music-based games. Signature segments of the show include Launch the Mic, Air Guitar, Don’t Drop the Beat, Perfect Mash-Up, Wheel of Impossible Karaoke, Slay It, Don’t Spray It, and many more.

The first season of That’s My Jam averages a 0.44 rating in the 18-49 demographic and 2.44 million viewers in the live+same day ratings (including DVR playback through 3:00 AM). The show gains 35-40% in the live+7 day delayed viewing and averages a 0.60 in the demo 3.40 million viewers. It’s one of the peacock network’s highest-rated unscripted series of the 2021-22 season.

· NBC has ordered a second season of its hit new show “That’s My Jam.”

· “That’s My Jam” has reached more than 250 million views across linear, digital and all social platforms, and is also NBC’s best ever digital launch for a non-scripted program.

· Hosted by Jimmy Fallon, “That’s My Jam” is an hourlong music and comedy variety game show that draws inspiration from the most popular “Tonight Show” games. Each episode features two teams of two celebrities competing for a charity of their choice in a series of music, dance, and trivia-based games and musical performances.

· Catch up on the series’ first season now streaming on Peacock.

· The show is licensed as a format by NBCUniversal Formats, a division of Universal Studio Group and will be adapted by TF1 Group in France.

What do you think? Have you checked out the That’s My Jam TV series on NBC? Are you glad to hear that it’s been renewed for a second season?

Love the show! I also love that everyone is playing for charity. It’s also gives us something clean and fun to watch.

I love this show great fun

Oh hell yeah!!! So so glad to hear that’s my Jam is coming back for a second season. I love this show. It keeps me laughing. Love the guests. Jimmy Fallon is the perfect host. I get ticked just watching him get ticked at the celebs. On suggestion would be to have them tell the charity they play for. Other than that…. It’s perfect. Can’t wait for second season . Thanks NBC for bringing laughter.