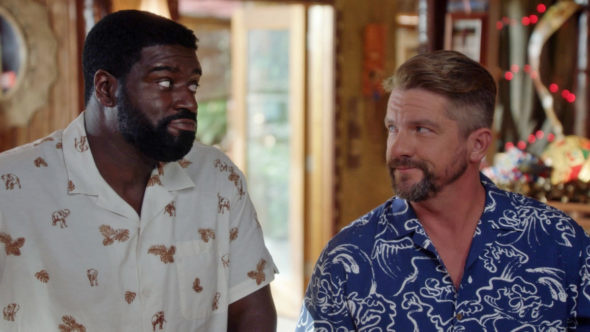 What new trouble with Thomas get into this year? Has the Magnum PI TV show been cancelled or renewed for a fifth season on CBS? The television vulture is watching all the latest cancellation and renewal news, so this page is the place to track the status of Magnum PI, season five. Bookmark it, or subscribe for the latest updates. Remember, the television vulture is watching your shows. Are you?

Airing on the CBS television network, Magnum PI stars Jay Hernandez, Perdita Weeks, Zachary Knighton, Stephen Hill, Tim Kang, and Amy Hill. Recurring performers include Lance Kim, Chantal Thuy, and Martin Martinez. This reboot of the 1980s TV show follows Thomas Magnum (Hernandez), a decorated former Navy SEAL who repurposes his military skills to become a private investigator. He lives in a guest cottage on Robin’s Nest, the luxurious estate where he works as a security consultant to supplement his P.I. business. The “majordomo” of the property is Juliet Higgins (Weeks), a beautiful and commanding disavowed MI:6 agent who keeps Magnum in line. When Magnum needs back-up on a job, he turns to his trusted buddies and fellow POW survivors, chopper pilot Theodore “TC” Calvin (Hill) and Orville “Rick” Wright (Knighton), a former Marine door-gunner who now runs a nightclub. Magnum frequently has run-ins with police detective Gordon Katsumoto (Kang) and the two are more alike than either cares to admit. The unofficial “House Mom” and cultural curator of Robin’s Nest, Teuila “Kumu” Tuileta (Hill) is also one of Magnum’s biggest fans.

The fourth season of Magnum PI averaged a 0.42 rating in the 18-49 demographic and 5.24 million viewers. Compared to season three, that’s down by 20% in the demo and down by 6% in viewership in the live+same day ratings (including DVR playback through 3:00 AM). While these numbers don’t include further delayed or streaming viewing, they are a very good indicator of how a show is performing, especially when compared to others on the same channel. There can be other economic factors involved in a show’s fate, but typically the higher-rated series are renewed and the lower-rated ones are cancelled. Find out how Magnum PI stacks up against other CBS TV shows.

Will CBS cancel or renew Magnum PI for season five? Despite airing on Friday nights, this series has done pretty well for the network. I’ll keep an eye on the numbers this season but, think it has a good chance of being renewed, possibly for a final season. I’ll update this page with breaking developments. Subscribe for free alerts on Magnum PI cancellation or renewal news.

5/13/22 update: Magnum PI has been cancelled so there won’t be a fifth season on CBS.

What do you think? Are you glad that the Magnum PI TV show has been renewed for a fifth season? Are you happy that NBC saved this TV series?

I love this series and am so glad it will return.

Please! Please! Do not cancel Magnum P.I.! We love this show. There are so few shows left that are enjoyable – many of the new ones are not! Do not cancel!!!!!

I love this show!! Don’t want it to be cancelled!! Please, more seasons is needed!!

CBS has been the network to watch for many years in our household. But canceling Magnum, PI was such a shock to us. I agree that canceling that awful NCIS Hawaii would have made WAY more sense. Terrible, terrible show with a cast that seems all over the place with no camaraderie whatsoever. But Magnum? One of our faves and has decent numbers in ratings and IMDb. Wow – CBS. HUGE MISTAKE. Hopefully NBC, my least favorite network, will bring it back AS IS and not try to change what works well in the series. I can just see the… Read more »

I can’t believe you all are cancer Magnum PI! You already canceled Hawaii 5 0 this season, which I loved better than the original one, now you’re canceling this one also plus NCIS New Orleans and added NCIS Hawaii which I haven’t been able to sit through not one episode yet! I truly don’t understand because I know there are more plenty of us who feel the same way! CBS use to be my favorite station to watch but now I’m all over the place watching other channels!

I agree. I thoroughly enjoyed Hawaii 5 o NCIS New Orleans and loved Magnum PI. I rarely watch NCIS LA. And dislike NCIS Hawaii. I think we should band together and boycott CBS.

Bring back Magnum PI. One of our fav shows. Have watch parties on weekend with 20 friends.

Really shocked to see Magnum PI hasn’t been renewed. It’s a great show and has so much more to give. Please let someone else pick it up it’s so much better than any of the other CBS shows. It’s got great chemistry between the main characters, beautiful locations and really good story lines. Can’t believe that’s it !!

I am absolutely shocked Magnum PI has been canceled!!! Truly my favorite show!! Such a disappointment!!!! Eliminate the crazy reality shows! I don’t find anything good about watching folks fight and backstab each other on TV. Bring back Magnum!!

How about getting rid of one of those silly shows that take murder,label it as entertainment .and hurt surviving families. After that get rid of some of those simpleton reality shows and I’m sure we’ll find some room.

I don’t understand how CBS can cancel such a wonderful show while the viewership is high. Doesn’t make sense! My husband and I are so disappointed and very sad that this excellent show is gone! Magnum always had a good balance of mystery and drama and good feelings about the show! The stories were great and the characters were so fun to watch! They made you wish that they were part of your family! Please don’t let this show go away! We looked forward every single week to watching Magnam!!!!

So mad that they canceled this amazing series. Great actors, great storylines with a lot of room to grow. It’s a shame they renew idiotic reality shows and cancel a great show with a ton of followers. I wish another smart network would pick it up.

My husband and I really enjoy Magnum PI, it’s our favorite tv show and we are dismayed to hear it has been cancelled. The stories are good and there isn’t violence which makes it a family oriented show. Please change your mind and bring it back.

Just when the show gets on a positive note, and the series starts to really take off, they decide to cancel…personally I think there there is going to be a lot of disappointed viewers. I believe we need a few more family oriented shows like Magnunm PI. I truly hope there is a change of heart.

I just learned Magnum PI was Canceled. I am bummed out. This is the only show I watched on CBS.