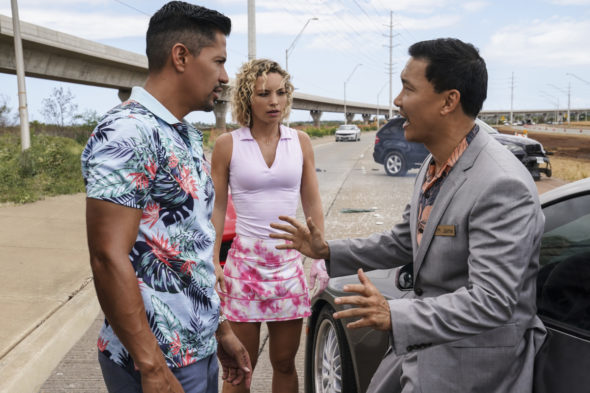 What new cases are coming to paradise in the fourth season of the Magnum PI TV show on CBS? As we all know, the Nielsen ratings typically play a big role in determining whether a TV show like Magnum PI is cancelled or renewed for season five. Unfortunately, most of us do not live in Nielsen households. Because many viewers feel frustrated when their viewing habits and opinions aren’t considered, we invite you to rate all of the fourth season episodes of Magnum PI here. *Status Update Below.

A CBS action series, Magnum PI stars Jay Hernandez, Perdita Weeks, Zachary Knighton, Stephen Hill, Tim Kang, and Amy Hill. Recurring performers include Lance Kim, Chantal Thuy, and Martin Martinez. This reboot of the 1980s TV show follows Thomas Magnum (Hernandez), a decorated former Navy SEAL who repurposes his military skills to become a private investigator. He lives in a guest cottage on Robin’s Nest, the luxurious estate where he works as a security consultant to supplement his P.I. business. The “majordomo” of the property is Juliet Higgins (Weeks), a beautiful and commanding disavowed MI:6 agent who keeps Magnum in line. When Magnum needs back-up on a job, he turns to his trusted buddies and fellow POW survivors, chopper pilot Theodore “TC” Calvin (Hill) and Orville “Rick” Wright (Knighton), a former Marine door-gunner who now runs a nightclub. Magnum frequently has run-ins with police detective Gordon Katsumoto (Kang) and the two are more alike than either cares to admit. The unofficial “House Mom” and cultural curator of Robin’s Nest, Teuila “Kumu” Tuileta (Hill) is also one of Magnum’s biggest fans.

What do you think? Which season four episodes of the Magnum PI TV series do you rate as wonderful, terrible, or somewhere between? Do you think that Magnum PI should be cancelled or renewed for a fifth season on CBS? Don’t forget to vote, and share your thoughts, below.

Magnum PI was one of the best shows on TV. The cast, crew and writers were terrific. Every episode had a positive message and always looked out for those in need. They addressed many issues that people deal with every day. They bought to light many issues that our Veterans face and did it in such a caring way. The chemistry of the cast is the best I’ve seen in a long time. They seem to genuinely like each other. I think it was a big mistake for CBS to cancel this show and I hope NBC picks it up.… Read more »

Magnum PI was the only show worth watching on CBS. The chemistry between the actors was evident throughout the show. It’s well written, character development in all 4 seasons has been brilliant, leaving you wanting more!
Take a look at social media – the show has fans world wide and deserves several more seasons. Please, reinstate this show and make sure it includes broadcasting in the UK.

Magnum Pi has been a joy to follow over the last 4 years. The characters are brought to life by a talented group of actors whos chemistry bounces out from the screen. I enjoyed the original back in the 80s and to have this updated version really rekindles old memories of those happy carefree days in TV land. The new Magnum is well written and produced which shows in the finished product. Look at all the comments all over the Internet.. plain and simple PEOPLE LOVE THIS SHOW !!
and so do I !!

Please save MAGNUM PI MY FAVORITE . THAT SHOW ARE BEST .

Never missed this show, main characters were all solid much better than the original. I am a seniors senior very saddened that this was canceled still hopping that season 5 will get picked up by another network

#SaveMagnumPI because they are the best

Please #SaveMagnunPI. We don’t watch Many shows most aren’t worth watching this one is the best show out there!

Please renew the tv show, I love it, I love the team, is wonderful and marvelous ❤️

Magnum PI should be renewed! #SaveMagnumPI