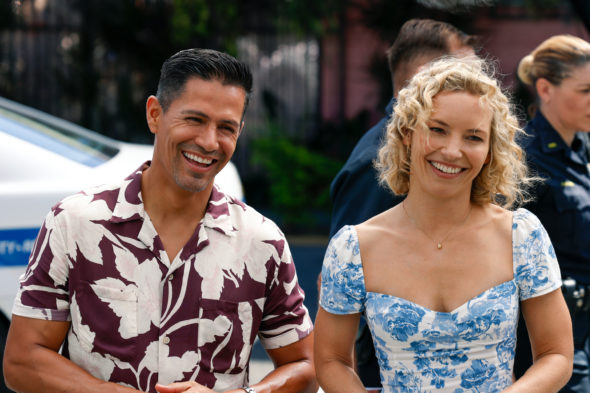 July has gotten off to a good start for fans of the Magnum PI series. CBS cancelled the reboot after four seasons but NBC has now made a deal to save it. The peacock network has renewed the show for two years — seasons five and six.

An action series, the Magnum PI TV show stars Jay Hernandez, Perdita Weeks, Zachary Knighton, Stephen Hill, Tim Kang, and Amy Hill. Recurring performers include Lance Kim, Chantal Thuy, and Martin Martinez. This reboot of the 1980s TV show follows Thomas Magnum (Hernandez), a decorated former Navy SEAL who repurposes his military skills to become a private investigator. He lives in a guest cottage on Robin’s Nest, the luxurious estate where he works as a security consultant to supplement his P.I. business. The “majordomo” of the property is Juliet Higgins (Weeks), a beautiful and commanding disavowed MI:6 agent who keeps Magnum in line. When Magnum needs back-up on a job, he turns to his trusted buddies and fellow POW survivors, chopper pilot Theodore “TC” Calvin (Hill) and Orville “Rick” Wright (Knighton), a former Marine door-gunner who now runs a nightclub. Magnum frequently has run-ins with police detective Gordon Katsumoto (Kang) and the two are more alike than either cares to admit. The unofficial “House Mom” and cultural curator of Robin’s Nest, Teuila “Kumu” Tuileta (Hill) is also one of Magnum’s biggest fans.

The fourth season of Magnum PI averaged a 0.42 rating in the 18-49 demographic and 5.24 million viewers. Compared to season three, that’s down by 20% in the demo and down by 6% in viewership in the live+same day ratings (including DVR playback through 3:00 AM). In the live+7 day ratings, the reboot averaged a 0.70 demo and 7.38 million with delayed viewing added in.

A mainstay of the CBS Friday night schedule, Magnum was dropped by the network in May. Word was that the cancellation came after CBS and the show’s co-producing studio, Universal Television, couldn’t come to an agreement for a fifth year. As traditional viewing has been dropping, networks are less willing to spend as much on shows that they don’t own.

It was reported last month that efforts were underway to revive Magnum PI and bring it to one or more NBC-Universal properties, like NBC or USA Network. The cast’s options were set to expire last night.

Deadline reports that the series has now been picked up for 20 new episodes which are expected to be broken up into seasons five and six and there is an option for more. This order will take the show to a total of 96 episodes. Magnum will continue to be a co-production of CBS Studios and Universal Television.

Members of the cast reacted to the double renewal via social media:

As I stated in a previous post, we couldn’t do #magnumpi without you all. Literally. Thank you. ❤️

What do you think? Are you glad to hear that Magnum PI has been saved from cancellation? Will you be watching seasons five and six on NBC?

I was devastated at first to learn Magnum was cancelled. Very pleased now to learn its been renewed! Love it and the characters!
Please please keep it going!

We love the show and will watch upcoming episodes. Glad the show was saved by NBC. CBS made a mistake!!

yes, i love this show and I will be watching

I will definitely be watching. Love the show!

OMG! There’s power in prayer is all I have to say!!! I never lived a series as much as this one!

YAY!!!! One of my favorite shows!! Very angry when it was cancelled by CBS. Now really happy it was picked up by NBC!!! Love the cast, love the stories, love Hawaii, and love NBC.

One of my favorite shows. Very happy it is coming back.

Glad Magnum will be back, hopefully Sky will purchase the new shows as it has been doing reasonably well on Sunday nights.

So happy that Magnum PI will be back on, great cast and wonderful story line!

I am so happy Magnum is coming back. It is one of our favorite shows.