Grease: Rise of the Pink Ladies has its cast. Paramount+ has announced casting for the prequel series as filming has begun. Starring Marisa Davila, Cheyenne Isabel Wells, Ari Notartomaso, Tricia Fukuhara, Shanel Bailey, Madison Thompson, Johnathan Nieves, Jason Schmidt, Maxwell Whittington-Cooper, and Jackie Hoffman, the series takes place in 1954, four years ahead of the events seen in the Grease film. The 10 episode season will land on the streaming service later this year.

Check out the cast below. 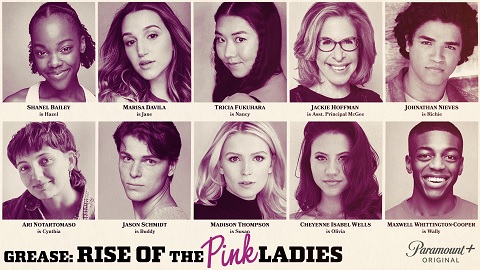 “Paramount+, the streaming service from ViacomCBS, announced today that principal photography has begun in Vancouver for its upcoming original series, GREASE: RISE OF THE PINK LADIES.

The musical series takes place four years before the original Grease; in 1954 before rock ‘n’ roll ruled, before the T-Birds were the coolest in the school, four fed-up, outcasts dare to have fun on their own terms, sparking a moral panic that will change Rydell High forever.

“We are thrilled to unveil our new original series that will introduce an incredible cast of young stars in the making and electrifying musical numbers you will fall in love with,” said Nicole Clemens, President, Paramount Television Studios & Paramount+ Original Scripted Series. “Annabel and Alethea have managed to brilliantly capture the spirit of the iconic beloved classic film which like RISE OF THE PINK LADIES, is both set in the past but relevant to the present.”

What do you think? Are you planning to check out Grease: Rise of the Pink Ladies on Paramount+?

I don’t get Paramont plus North am I going to get it in the near future.

Spare us more of this unimaginative recycled but now woked up trash. Every possible demographic appears to be represented in this, well besides middle aged white guys obviously, no doubt the story lines will be fraught with issues around gender identity, teen angst and so on. Won’t someone please do something imaginative, rather than recycle yet again ideas from a bygone era. Also, if you’re going to be representative, where is the middle class white guy having a mid life crisis?

All these streaming services trying to cash in on their I.P’s!