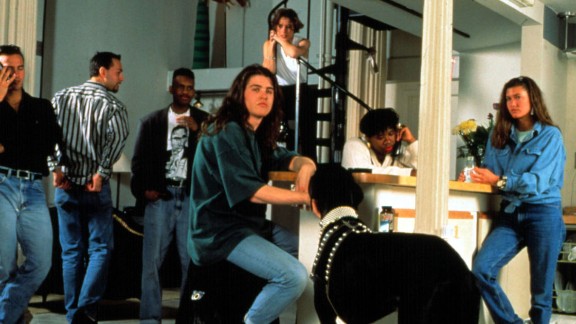 The participants include Norman Korpi, Julie Gentry, Becky Blasband, Kevin Powell, Andre Comeau, Heather Gardner, and Eric Nies. The original MTV series, which premiered in 1992, aired for 13 episodes and follows a group of strangers as they live together in a small New York loft.

Paramount+ revealed more about the reunion series in a press release.

“Paramount+, the highly anticipated streaming service from ViacomCBS, and MTV Entertainment Studios, today announced that MTV’s THE REAL WORLD franchise is returning to kick off the March 4th launch of the rebranded service. The first REAL WORLD installment will reunite the original New York cast in the iconic NYC loft for THE REAL WORLD HOMECOMING: NEW YORK.

On the heels of MTV’s 40th birthday, the brand that birthed reality television is bringing it back to where it all began. With reality one of the key genres for the new streaming service, Paramount+ is poised to take advantage of ViacomCBS’ global leadership position in the category. Paramount+ will be the ultimate destination for the biggest hit franchises including LOVE & HIP HOP, LOVE ISLAND, RUPAUL’S DRAG RACE, THE AMAZING RACE, SURVIVOR, THE CHALLENGE, BIG BROTHER, JERSEY SHORE and many more.

“THE REAL WORLD is credited with creating the Reality TV genre and was one of the first series to tackle important and yet unrepresented topics such as LGBTQ, race, gender, HIV/AIDS and religion,” said Chris McCarthy, President of MTV Entertainment Group. “With Paramount+ being the home to so many global reality hit franchises it seems only fitting to bring back the franchise and cast that started it all for the launch.”

Created for MTV by Jonathan Murray and the late Mary-Ellis Bunim of Bunim/Murray Productions, THE REAL WORLD helped shape a generation and sought to spotlight culturally resonant stories like never before – including one of the first LGBTQ+ relationships documented on a TV series, the first televised same-sex commitment ceremony, and its unforgettable portrayal of Pedro Zamora’s battle with HIV.

In the multi-episode docuseries, the original seven strangers will revisit the shocking moments and explosive issues that transpired during the historic season and discuss how they parallel in today’s social climate. After spending decades apart, viewers will reconvene with New York housemates Becky Blasband, Andre Comeau, Heather B. Gardner, Julie Gentry, Norman Korpi, Eric Nies and Kevin Powell to find out how the series transformed their lives since the cameras stopped rolling and to find out, once again, what happens when they stop being polite… and start getting real.

Celebrated for its diverse casting and honest portrayal of contemporary young adulthood, THE REAL WORLD illustrated a simple yet powerful idea of connecting people from widely divergent backgrounds to find common ground on the issues that divided them and generated conversations that reverberated loudly through media and youth culture.”