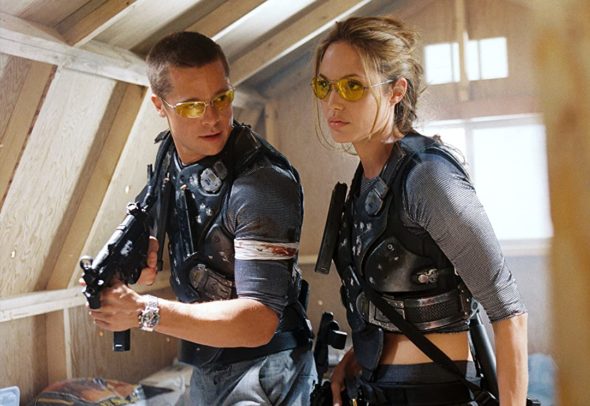 A reboot of Mr. & Mrs. Smith is coming to Amazon Prime Video. The series is based on the 2005 action comedy film starring Angelina Jolie and Brad Pitt (above). This new incarnation will star Phoebe Waller-Bridge and Donald Glover as the pair of spies who work for opposite sides while being married to each other.

Viewers will have to wait a bit to see this series though. It won’t arrive until 2022.

From Amazon Studios and New Regency, Mr. and Mrs. Smith will premiere exclusively on Prime Video in more than 240 countries and territories worldwide.

“Talk about the dream team! Donald and Phoebe are two of the most talented creators and performers in the world. It’s truly a dream for us, as it will be for our global audience, to have these two forces of nature collaborating as a powerhouse creative team,” said Jennifer Salke, Head of Amazon Studios. “Mr. and Mrs. Smith is an iconic property, and we can’t wait to see how Donald, Phoebe and Francesca make it their own. We’re thrilled to be working with them, and with such great partners at New Regency.”

Said Yariv Milchan and Michael Schaefer of New Regency: “Having had the pleasure of successful collaborations with the incredibly talented Donald Glover, most recently on Guava Island, we all started talking about other projects to do together and when he suggested the idea of a new take and iteration on the New Regency film, Mr. & Mrs. Smith, we jumped at the chance to get going right away. Adding Phoebe and her company Wells Street Films as a collaborator and co-star takes everything up another level and makes the project worthy of a reimagining for both new audiences and past fans of the original film. We are so excited to be working with Donald, Phoebe, Francesca and the entire team at Amazon Studios.”

The 2005 feature film Mr. and Mrs. Smith, from New Regency and starring Brad Pitt and Angelina Jolie, grossed $487 million worldwide during its release.”

Check out the announcement about the new Mr. & Mrs. Smith below.

A post shared by Amazon Prime Video US (@amazonprimevideo)

I think one of the biggest draws to this movie was that the original two actors were incredibly great looking, sexy, and had great on screen chemistry. Donald and Phoebe are so opposite of this. What in the world was casting and production thinking?

“iconic franchise”… It was a one shot movie that was more about the actors than the story. No one asked for this not will anyone care when it arrives except for those praising “diversity” for clout.

I don’t really think this is a win for diversity. They only recasted one person as a minority. Maybe if the entire cast was majority diverse, I could see your point. I also don’t want to praise this if it sucks like Ghostbusters.

Yet another Hollywood film is being adapted into a tv/web series. How about an original idea for once?

I don’t like the casting either! I would have liked a Ryan Reynolds/Blake Lively version. That might have been better.

I personally don’t like the movie that much, so I can’t say I’ll wait around for this. And once again, another reboot. Goodness. New ideas, people.

Don’t like the cast. I am not interested. The original one was perfection. Put it on BET network.