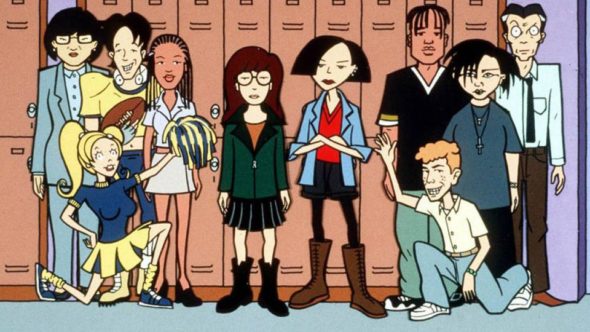 MTV is going full retro. Today, the network announced they are developing reboots of classic TV shows such as The Real World, Daria, and Aeon Flux.

The revivals are part of MTV’s new unit, MTV Studios, which will “develop and produce a full slate with a focus on beloved series, franchises and spin-offs that span MTV’s 35-year history.” Alongside The Real World, Daria, and Aeon Flux, MTV Studios is also working on an updated version of Made.

Read more info from MTV below:

New York, NY (June 21, 2018) – MTV today announced the launch of MTV Studios, a new unit focused on developing new series and re-imaginations of its most iconic hits for partners across SVOD and Linear. MTV Studios will develop and produce a full slate with a focus on beloved series, franchises and spin-offs that span MTV’s 35-year history. With over 200 titles, MTV Studios has one of the largest libraries of young adult series and franchises in TV history.

The slate will also include two new titles including “The Valley” (working title), a coming of age docuseries in the spirit of “The Hills” and “Siesta Key” which follows a group of young friends growing up in the Valley town of Nogales, Arizona, a city split in half, with one side in the United States and the other in Mexico. Also included is “MTV’s Straight Up Ghosted,” which follows young people trying to reconnect with lost friends, lovers and family members and confront them about why they have been ghosted.

“MTV has the biggest collection of hit youth franchises that spans more than three decades of content and over 200 titles, part of which have fueled our resurgence,” said Chris McCarthy, President of MTV. “With MTV Studios, we are for the first time ever opening up this vault beyond our own platforms to reimagine the franchises with new partners.”

MTV Studios builds on MTV’s growth in the past year, as the brand has reclaimed its core of youth, music, and reality programming. MTV is currently the fastest growing network on TV, with viewership in prime time up 21% year-over-year. Additionally, MTV attracted 2.9 billion streams in 2018, up +83% YoY, and has amassed more than 350 million social followers around the globe. The brand’s rapid growth across platforms offers MTV Studios’ partners a vibrant marketing platform for new and reimagined co-productions alike.

The iconic animated franchise is reinvented through the eyes of heroine Daria Morgendorffer and one of her closest friends Jodie Landon. These two smart young women take on the world, with their signature satirical voice while deconstructing popular culture, social classes, gender and race.

This cult anime classic is back for a live action remake, as the badass heroine assassin Aeon Flux teams up with a group of biohacking rebels in the not too distant dystopian future to battle a brutally repressive regime and save humanity.

The show that invented modern reality television returns to its roots. This reconnection to innocence for the trailblazing series strips away the polarization and cold anonymity of social media, the din of the 24-hour news cycle, and the facades of the instafamous culture to find out what happens “when seven strangers are picked to live in a house… stop being polite and start getting real.”

In the spirit of “The Hills” and “The City,” this new show follows a group of 20 somethings in a classic coming of age docu-series featuring first loves, relationships and life decisions – with a twist. This group of young people is living in “The Valley” of Nogales, Arizona, a town along the border of the United States and Mexico. This is the real life story of friends who are growing up on the edge of two countries, two cities as they share one Valley, their youth and common bond.

While social media has connected the world more than ever, it has also undercut our ability to deeply connect and communicate. Today, critical relationship-ending conversations and confrontations have faded into digital dialogue or worse “ghosting.” This series explores real stories of real people who vanished by blocking them, and unlocks the reality and uncomfortable truth to satisfy the ultimate question–why did you leave me?

What do you think? Are you a fan of classic MTV shows? What other series would you like to see rebooted?

who in the hell is Jodie?!

I can’t see Aeon being the same without Peter Chung. I’ll give it a chance but I’m slightly skeptical

IMHO, I can’t see Aeon being the same without Peter Chung. I’ll hope for the best but I’m slightly skeptical

So does that mean The Real World is cancelled?