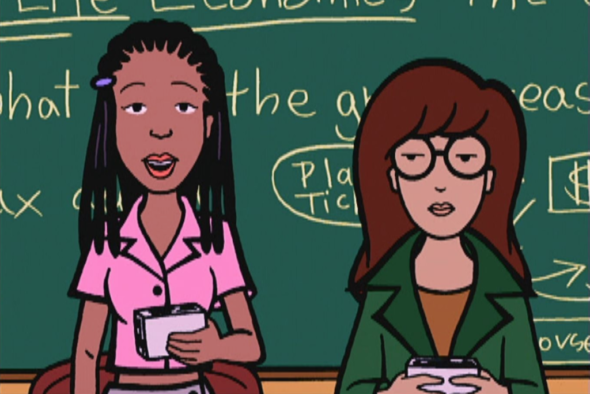 The animated series “will be centered around fan favorite and Daria’s good friend Jodie Landon, an African American character from the original series credited with helping to shape a generation of women.” Daria originally ran on MTV from 1997 to 2002.

On Jodie, Ross will provide the voice for the main character and executive produce the MTV Studios series. You can read more info below:

New York – June 13, 2019 – MTV Studios, a unit of MTV and Viacom (NASDAQ: VIAB, VIA) today announced Peabody(R), Emmy(R) and Golden Globe(R) winning actress Tracee Ellis Ross will voice and executive produce “Jodie,” the first in a series of spinoffs based on MTV’s iconic “Daria” franchise. “Daria,” which ran for five seasons (1997-2002) came out of MTV’s “Beavis and Butthead” based on the widespread appeal of the Daria Morgendorffer character whose wry wisdom was beyond her high school years. Daria was hailed for her feminist take on key issues such as class, race and gender.

“Jodie” will be centered around fan favorite and Daria’s good friend Jodie Landon, an African American character from the original series credited with helping to shape a generation of women. “Jodie” will follow her as she comes into her own and enters the workplace in her first post-college job in tech. Other former students of Lawndale High will also appear.

What “Daria” did for exploring the inanity of high school, “Jodie” will do for exploring the trials and tribulations of a first job. “Jodie” will satirize workplace culture, Gen Z struggles, the artifice of social media and more. With themes of empowerment across gender and racial lines, explorations of privilege, and a wicked sense of humor, “Jodie” marks the first adult animated sitcom to center around an African American female lead in nearly two decades. At its heart, “Jodie” will shine a light on the personal and professional issues all young people face in today’s complex, socially-conscious world.

The “Jodie” news comes at a time of rapid growth for the MTV brand and expands beyond traditional platforms with the launch business new streaming channels, live events, documentary films division and studio productions for third-party platforms with MTV Studios.

“I am thrilled to bring this project to life with MTV, both as executive producer and by voicing Jodie’s character. Being able to give voice to fresh, feminist and unexplored stories of young women excites me. ‘Jodie,’ will spin-off from the cult classic ‘Daria,’ and with the brilliant, sweet and sarcastic black girl magic that is Jodie Landon, we will feature a diverse cast, comprised mainly of unapologetically smart and ambitious young female characters who are vulnerable and flawed and interesting and funny. As a very cool bonus, ‘Jodie’ will be the first adult animated show in almost 20 years that will star a black woman. It will be a smart, funny workplace comedy full of commentary about everything from gentrification to sex to tech to call-out culture,” said Tracee Ellis Ross.

“Given the passion for these characters, there was only one person who could build upon the legacy to reimagine Jodie for a whole new generation, and that person is Tracee Ellis Ross,” said Chris McCarthy president of MTV. “This marks another exciting step forward for MTV Studios as we build out a wide new slate based on the rich characters from the history in MTV Animation.”

As previously announced, Grace Nkenge Edwards is the creator and head writer on “Jodie.” Currently, she’s writer/co-producer for the critically-acclaimed HBO series “Insecure.” Additional credits include multiple seasons on the Emmy-nominated comedy “Unbreakable Kimmy Schmidt” and “Inside Amy Schumer.”

What do you think? Are you a fan of Daria? Will you watch Jodie?

I just love watching Daria growing up in high school and can’t wait to see this show. I very happy they pick Jodie to focus on.