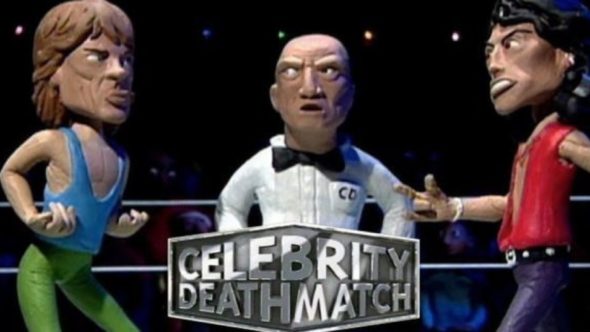 Can anyone really ever get too much stop-motion clay animation programming? MTV Studios doesn’t think so. To that end, it is reviving its old Celebrity Deathmatch TV show, for a new generation. Ice Cube, will star, and is executive producing alongside Jeff Kwatinetz via Cube Vision. Eric Fogel — who created the original series that ran on MTV for eight seasons, between 1998 and 2007 — will also executive produce.

It doesn’t sound like the series will wind up on MTV though. MTV Studios is making the series for either an “exclusive” streaming platform, or a premium network. Learn more about the Celebrity Deathmatch TV series revival, from this MTV press release.

MTV Studios to Reimagine “Celebrity Deathmatch” for a New Generation

Ice Cube and Cube Vision Set to Executive Produce, With Ice Cube to Lend Voice Talent in a Lead Role

NEW YORK — MTV Studios today announced plans to reimagine “Celebrity Deathmatch,” the seminal stop-motion satire that skewered celebrities, politicians and everyone in between during its famed original run. Ice Cube joins the franchise for the first time and will both star and executive produce alongside his partner Jeff Kwatinetz through his Cube Vision production company. Series creator Eric Fogel will return to executive produce as well, with additional showrunners and talent to be named shortly.

The all-new “Celebrity Deathmatch” will be available as a weekly series for an exclusive SVOD or premium broadcast partner in 2019. The move marks the first step in reinventing the franchise across consumer products, gaming, theatrical and more.

“We’re excited to grow our partnership with Ice Cube and Cube Vision to reimagine this fan favorite,” said Chris McCarthy, President of MTV, VH1 and CMT. “‘Deathmatch’ was the meme before memes, remains a hot topic on social media and will be a smart, funny way to tackle the over-the-top rhetoric of today’s pop culture where it belongs – in the wrestling ring.”

“Happy to once again be working with Viacom and MTV on a fan favorite like ‘Celebrity Deathmatch’ and to continue our success together,” said Ice Cube.

“Celebrity Deathmatch” is among the most beloved series in a long line of MTV animation classics. The original “Celebrity Deathmatch” is highly regarded as an incubator for world-class comedic talent, including New York Times-bestselling author A.J. Jacobs (1999-2002) and writers and producers who went on to contribute to comedy classics from “The Simpsons” to “Key and Peele” to “Family Guy” and more.

MTV is the leading global youth media brand in 180 countries, reaching nearly 450 million households in more than 30 different languages across every platform. A unit of Viacom Inc. (NASDAQ: VIAB, VIA), MTV operations span cable and mobile networks, live events, theatrical films and MTV Studios, a unit that produces new and reimagined content for SVOD and linear platforms based on MTV’s library of over 200+ youth titles and franchises.

Cube Vision is a film and television production company, founded in 1998 by award winning actor, writer, producer and music legend Ice Cube. The company’s debut film was Next Friday, the sequel to Cube’s 1995 classic Friday, a film that he both wrote and starred in. Since then, Cube Vision has gone on to produce hit films such as Barbershop 1, 2 and The Next Cut, Are We There Yet, Ride Along 1, 2 – as well as the critically acclaimed documentary film Straight Outta LA for ESPN Film’s 30 for 30 and the scripted series Are We There Yet for TBS. Most recently, Cube Vision produced the Oscar nominated film Straight Outta Compton, a biographical film inspired by the rise and fall of the world’s most dangerous group N.W.A. – which grossed over $200 million worldwide and topped the US box office for 3 consecutive weeks. In total, Ice Cube and Cube Vision films have grossed over 1 billion dollars at the box office, making it one of the most successful independent production companies in Hollywood.

What do you think? Are you a fan of the original Celebrity Deathmatch TV show? Will you tune in for the reboot? Let us know, below.