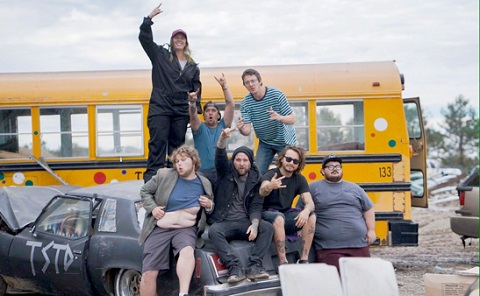 Move over, Jackass. MTV just announced their new TV show Too Stupid to Die will premiere in June.

The stunt show “is the story of a backyard stunt family making a name for themselves with nothing but blood, sweat and fearlessness.”

Too Stupid to Die is slated to premiere on MTV in June. You can read more details below:

New York, NY- April 20, 2018 – MTV and Gunpowder & Sky, the global content studio, announced today the next generation stunt series, “Too Stupid To Die”, developed in conjunction with YouTube banned, online sensation and daredevil, Zach Holmes. Packed with bizarre pranks, hilarious comedy and outrageous stunts, “Too Stupid To Die” is the story of a backyard stunt family making a name for themselves with nothing but blood, sweat and fearlessness. The eight-part, half-hour series is set to premiere in June.

“‘Too Stupid to Die’ is the right kind of show and characters who fit our coming of age strategy that’s driving MTV’s growth,” said Chris McCarthy, President of MTV. “We were excited to develop this project with Van and thrilled to work together again.”

“We are always looking to uncover talent in front of and behind the camera from compelling subcultures,” said Van Toffler, CEO of Gunpowder & Sky. “‘Too Stupid To Die’ represents a nonconformist group of friends existing in the heart of our country so I’m excited to bring it to MTV, the original home of shining a light on emerging subcultures”.

What do you think? Do you enjoy stunt shows? Will you watch Too Stupid to Die?

MTV is too stupid to be a music station like it used to be.

will there be any reruns. I know the original owner of the Pontiac that is in the picture.