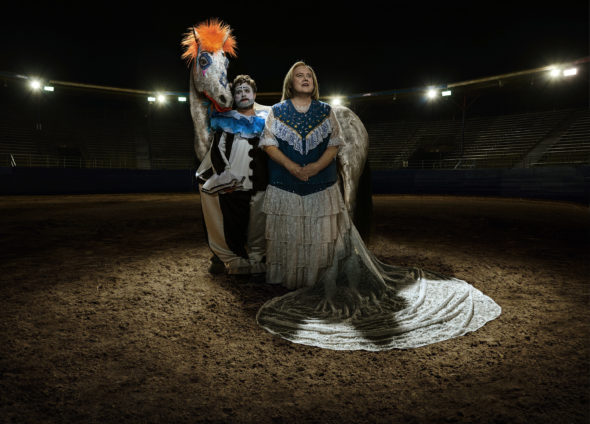 Will Chip’s wild ride at the rodeo continue? Has the Baskets TV show been cancelled or renewed for a fourth season on FX? The television vulture is watching all the latest cancellation and renewal news, so this page is the place to track the status of Baskets, season four. Bookmark it, or subscribe for the latest updates. Remember, the television vulture is watching your shows. Are you?

An FX black comedy, Baskets stars Zach Galifianakis, Louie Anderson and Martha Kelly. The surreal series centers on Chip Baskets (Galifianakis), who dreamt of being a classically trained French clown, but things didn’t pan out for him when he went to study in Paris. He returns home and, this season, Chip works at his judgmental family’s rodeo, headed up by his mom, Christine (Anderson). Chip has his first full-time job since he worked at Arby’s, but seems to lack the requisite skills. Although his twin brother Dale (Galifianakis) is the only one of the Baskets to have run a business, he can’t get anyone to listen to him. When she’s not otherwise distracted, at least Chip’s friend Martha (Kelly) is able to lend a hand.

The third season of Baskets averaged a 0.14 rating in the 18-49 demographic and 407,000 viewers. Compared to season two, that’s down by 31% in the demo and down by 16% in viewers. Find out how Baskets stacks up against the other FX TV shows.

Will FX cancel or renew Baskets for a fourth season? The ratings aren’t very strong but I suspect it’s cheap to produce. Galifianakis and Anderson have also garnered awards and nominations. I believe Baskets will be renewed for a fourth season, as long as the talent want to continue doing it. For now, I’ll keep an eye on the Nielsens and update this page with breaking developments. Subscribe for free alerts on Baskets cancellation or renewal news.
3/7/18 update: Zach Galifianakis has revealed that Baskets has been renewed for a fourth season. Details here.

What do you think? Are you glad that the Baskets TV show has been renewed for a fourth season? How would you feel if FX had cancelled this TV series, instead?

This show is awesome! Always guaranteed to laugh, instantly makes you happy!

Show is very funny, written & acted. Works on many levels- production value done on the cheap feels right for this show, set in a Bakersfield home & rodeo. I recommended program to countless friends who tried to catch up on past seasons, but there is an additional charge. First 3 shows of season 1 are free but it’s not enough to understand the story arc or complexity of the characters. No wonder audience share is around 400K. Why would viwers, who don’t know the show, pay for firsr 3 seasons when they don’t know what they are paying to… Read more »

I love the show Baskets!! Please keep producing this show…I have loved it from the beginning and Zach and Louie are exceptional in their roles as are all the cast!! I look forward to this every season as these are two of the funniest men alive…Great Great show!!

Have enjoyed this quirky show from the beginning. Thanks to FX for making such an edgy, funny, and poignant series. I hope that Season 4 and more will happen.