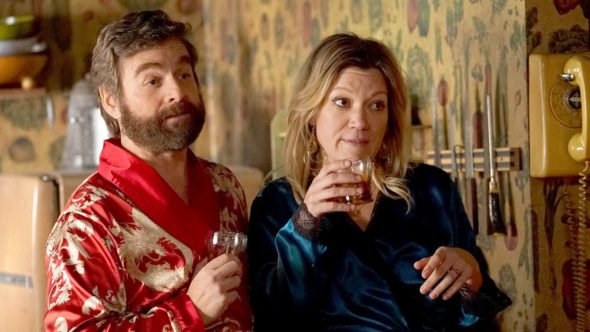 In March, Zach Galifianakis revealed FX had renewed Baskets for season four but the network didn’t officially announce the renewal until now. The new season is expected to debut in 2019. You can read more info below:

LOS ANGELES, May 24, 2018 – Baskets, the acclaimed comedy series executive produced by and starring Zach Galifianakis, has been renewed for a fourth season on FX, it was announced today by Eric Schrier and Nick Grad, Presidents of Original Programming for FX Networks and FX Productions.

“Baskets continues to deliver thanks to the dream creative team led by Jonathan Krisel and Zach Galifianakis, and we couldn’t be happier to order a fourth season to air next year,” Schrier said. “Each season brings us closer to the Baskets family and their pursuit of life, love and clowning glory. Our thanks to the producers and the cast for making Baskets such a joy to watch.”

The recently concluded third season saw the Baskets family attempt to run a rodeo together. In the emotional season finale, the Baskets family gathered to celebrate New Year’s Eve with “Ken” (recurring guest star Alex Morris), who had a question for “Christine” (Louie Anderson).”

What do you think? Do you watch Baskets? Will you check out season four?

I have watched the first 3 seasons but the third went off tangent a little too much and I think that it has essentially run it’s course.

I no longer have to hold my breath, Baskets has been renewed!!!

I’m relieved, I no longer have to hold my breath. Baskets is renewed! (There is a god after all.)