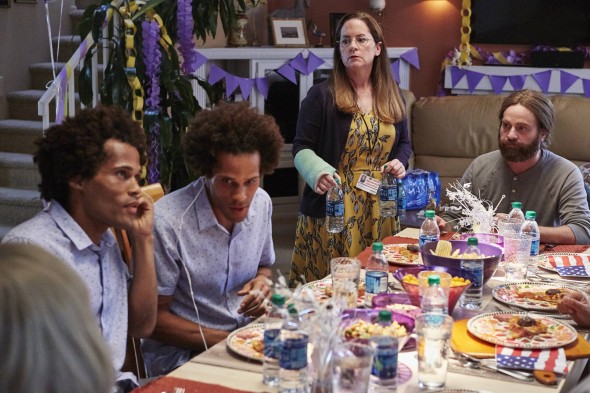 FX has renewed the Baskets TV series for a second season, which will premiere in early 2017. In the comedy, Zach Galifianakis’ Chip Baskets dreams of being a French clown, but real life keeps getting in the way. With a language barrier and no money, Baskets returns to the States, where he faces his past, works as a rodeo clown, and deals with his family. Louie Anderson and Martha Kelly also star.

“Baskets is bold, brilliant and incredibly funny and we could not be happier with the reception it’s received in its breakout first season,” Schrier said. “Baskets brings together three of the most innovative comedic minds working today – Zach, Louis and Jonathan – and we thank them, the rest of the creative team and the entire cast for everything they’ve done for the series.”

In Baskets, Chip Baskets (Galifianakis) wants to follow his dream of being a French clown – however, reality keeps interfering. Saddled with financial difficulties and facing an impenetrable language barrier, he moves back home to Bakersfield with high hopes. There, he is forced to confront his past while working as a rodeo clown and competing with his siblings for his mother’s (Louie Anderson) approval and affection. The series also stars Martha Kelly as Chip’s insurance claims adjuster.

Baskets returns with an all-new episode this Thursday, February 25 at 10 PM e/p on FX: “DJ Twins” – All the free bottled water in the world can’t soften the sting of rejection during an evening with the family. Written by Jonathan Krisel; Directed by Jonathan Krisel.

FX is the flagship general entertainment basic cable channel of FX Networks, a business unit of 21ST Century Fox. FX Networks is comprised of FX, FXM and FXX. Launched in June of 1994, FX is carried in more than 92 million homes. The diverse schedule features a growing roster of critically-acclaimed and award-winning hit dramas series, including The Americans, The Strain, Tyrant and the upcoming Taboo; the critically-acclaimed limited series American Horror Story, Fargo and The People v. O.J. Simpson: American Crime Story; acclaimed hit comedy series including the award-winning Louie, Archer, Sex&Drugs&Rock&Roll, Baskets and the upcoming Better Things and Atlanta. FX is the former home of the critically-acclaimed and award-winning hit drama series The Shield, Nip/Tuck, Rescue Me, Damages, Sons of Anarchy and Justified. The network’s library of acquired box-office hit movies is unmatched by any ad-supported television network. FX’s roster of acquired hit series includes Two and a Half Men, How I Met Your Mother and Mike & Molly.

What do you think? Are you a fan of the Baskets TV show? Do you plan to watch the second season?