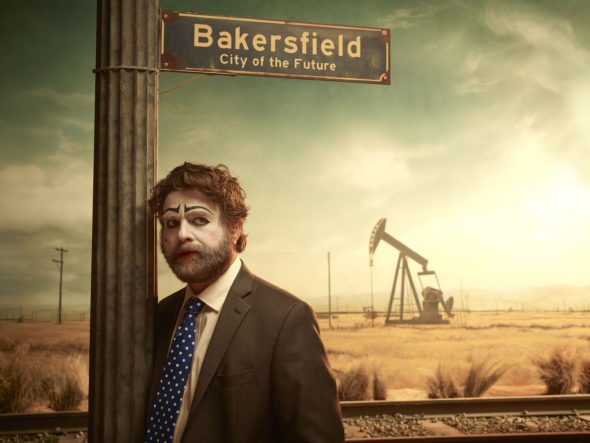 Is this the end of the rodeo for the Baskets? Has the Baskets TV show been cancelled or renewed for a fifth season on FX? The television vulture is watching all the latest cancellation and renewal news, so this page is the place to track the status of Baskets, season five. Bookmark it, or subscribe for the latest updates. Remember, the television vulture is watching your shows. Are you?

An FX black comedy, Baskets stars Zach Galifianakis, Louie Anderson, and Martha Kelly, with Alex Morris recurring. The surreal series centers on rodeo clown Chip Baskets (Galifianakis), his twin, Dale (Galifianakis), and mother Christine (Anderson). In season four, Chip decides it is high time to move out, but has a hard time adapting, despite the help of Martha (Kelly) and a life coach.

The fourth season of Baskets averaged a 0.11 rating in the 18-49 demographic and 327,000 viewers. Compared to season three, that’s down by 25% and 20%, respectively. Find out how Baskets stacks up against the other FX TV shows.

Will FX cancel or renew Baskets for a fifth season? The ratings are low but I suspect that this show is fairly inexpensive to make (for a scripted series). I think it will be renewed as long as Galifianakis and company want to continue. For now, I’ll keep an eye on the Nielsens and update this page with any developments. Subscribe for free alerts on Baskets cancellation or renewal news.

8/1/19 update: FX has announced that the Baskets TV show is ending with season four.

What do you think? Should the Baskets TV show have been renewed for a fifth season? Are you sorryt that this FX TV series is ending, instead?

Baskets Cancelled =( bring back. or at least do a one shot episode where you see everybody 5 years later or something like that