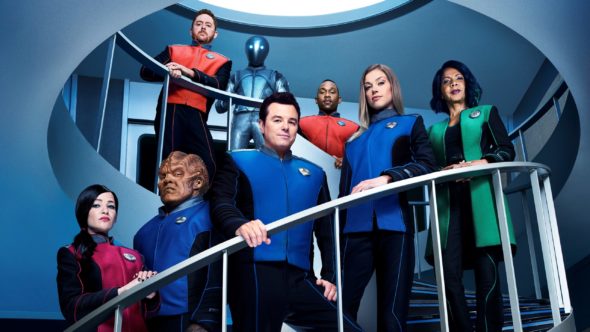 The Orville is returning for its third season after a long absence but, season three is likely the end of the Hulu series. Series creator/star Seth MacFarlane and the other members of the cast were released from their contracts in August and have moved on to other projects. If a fourth season were to be made, it would likely be difficult to reassemble the entire cast.

Also starring Scott Grimes, Adrianne Palicki, Penny Johnson Jerald, Peter Macon, J Lee, Mark Jackson, Jessica Szohr, and Anne Winters, the series is “set 400 years in the future and follows The U.S.S. Orville, a mid-level exploratory spaceship. Its crew, both human and alien, face the wonders and dangers of outer space, while also dealing with the problems of everyday life..”

The third season of The Orville has been a long time in coming. The series originally aired on FOX and was renewed for a third season but was subsequently moved to Hulu. Production was delayed by the pandemic.

The Orville: New Horizons (aka season three) premieres on Hulu on June 2nd.

What do you think? Are you excited about the return of The Orville? Are you hoping for a fourth season someday?

MacFarlane has the opportunity of a lifetime to create a money goldmine and compete with the big boys. He could be remembered for bringing back the real ‘fun’ in scifi and be remembered as someone on the level of Roddenberry, Lucas, and Speilberg.. I don’t know why he isn’t completely committed to The Orville. His new “Ted” series won’t last one season.

It’s unfortunate but the delays in production had all but guaranteed this. Thankfully we’ll still be getting the season. Many other shows in this situation would have been canceled before they even had a chance to film.

I love the Orville but I have not watched it since it went to Hulu. If it returns to network TV or local cable, then I’ll watch it. Bring it back!

This new season will be the first episodes that will air on Hulu. They’ve had a ton of delays because of covid

Show the third season on Fox as well

The Orville is so entertaining with multiple layers in its presentation of characters and storylines. Family Guy and American Dad are just embarrassing–we were so tired of the nastiness, we stopped watching them years ago. Stick with sci-fi, ditch the puerile “humor”.

Why is Seth so committed to those animated shows then treats Orville like an afterthought? It should be the other way around, he should retire Family Guy and American Dad and focus on Orville. Is he that much into doing character voices?

I think it’s Hulu that’s doing this to the Orville. As far as I know, Seth loves doing the Orville, at least from interviews I’ve seen.

they pay too much to ditch them

A colossally stupid decision. This season has been so long awaited that fans are chomping at the bit.

So a season 4 is an obvious shoe in.

I rather the orville then star trek any day .. the orville is the best ever Sci fiction show by Seth ever made please Please Please keep it going for the forth season and more

Plz keep going with the orvile .it is the best tv series ever

Oh NO!!! All of us here in our quiet little Texas town love this show. We have been waiting patiently these past 2 years because, it’s worth the wait. Please Seth , get past what ever is causing this, nobody wants another Ted series

This series has so much more potential, just overall, to air for more than just 3 seasons worth! The Orville was just getting started and there is so much more to be known and seen with the characters and all their exploratory trips in space. Please don’t let season 3 be the last!!

Nooo….. please no?! I love the Orville. We had to wait so long for season 3, that was hard enough. It is such a great show!

Edit: *We’ve had to wait so long for season 3. It’s hard enough waiting until June when it returns.

I can’t wait for New Horizons… would love to see as many seasons as possible. Only 1 more season would be leaving way too much on the table. Please, please, please bring at least a season 4!!