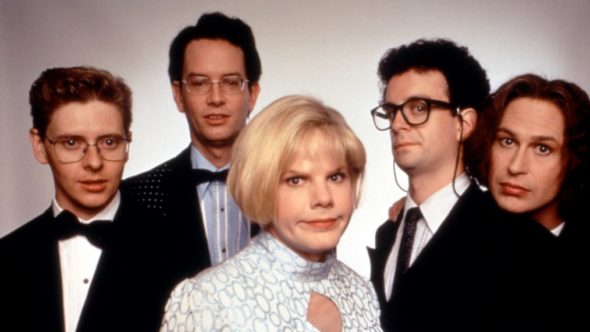 “Today, at the Prime Video Presents Canada showcase event, Prime Video revealed the premiere date and official trailer for the new Canadian Amazon Original series The Kids in the Hall, produced by Broadway Video. The iconic Canadian comedy troupe – Dave Foley, Bruce McCulloch, Kevin McDonald, Mark McKinney, and Scott Thompson – is back with a new season of their groundbreaking sketch series, featuring a fresh batch of fun offbeat characters and beloved favourites, with sketches that pack a satirical punch, laced with the hilarious, edgy, and fearless comedy The Kids are famous for. The Canadian Amazon Original series The Kids in the Hall will be available exclusively on Prime Video on May 13 in more than 240 countries and territories worldwide.

“Hugely influential and envelope-pushing, The Kids in the Hall returns without missing a beat. The new sketches capture the energy and magic of the original series, and are a true testament to what made the group so successful in the first place,” said Christina Wayne, head of Originals Canada, Amazon Studios. “We are thrilled to bring The Kids back for their fans to enjoy and introduce them to new audiences around the world on May 13.”

“What an amazing gift to put on our old wigs, and even get some new ones… ,” said The Kids in the Hall.

Check out the trailer for The Kids in the Hall below. A NSFW red band trailer can also be found here.

What do you think? Are you excited about the return of The Kids in the Hall? Were you a fan of the original series?

I’m in Shock! Literally. I just found myself scrolling up and down the page, reading and re-reading the announcement. The orginal cast, and then the guest stars, and then to see that it’s still associated with Michaels. I’m so freaking excited I can’t even stand it!