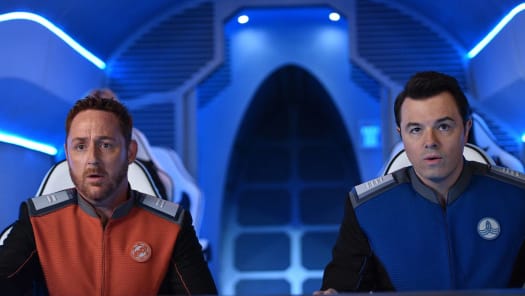 More of The Orville is still on the way. The man in charge of scripted programming at Hulu, Jordan Helman, gave viewers an update on the return of the sci-fi comedy. The series moved to the streaming service after airing for two seasons on FOX.

Helman said the following about the return of the series, per Deadline:

“The past year and a half has been complicated on a variety of levels as it pertains to production. I can’t share a launch date, but we’re really excited about what we’ve seen thus far.”

Production has had a number of stops and starts since October 2019 when it first began. Production halted in March 2020 and restarted in December 2020.  Production stopped again in January 2021 when there was a COVID-19 surge.

As for the future of the Hulu series beyond season three, a fourth season is still possible. It had been rumored that the series would end with its third season but Helman said the following:

“The future of the show remains an open conversation and there have been no conversations otherwise. I believe the fans of the show that are coming to us from Fox will be deeply excited and satiated. I also think for new fans that maybe didn’t experience it, it will feel new to them.”

A premiere date for season three of The Orville will be announced at a later time.

What do you think? Are you planning to check out The Orville on Hulu? Do you want a fourth season?

Best show on TV hands down.

The Orville may be a parody… but it’s still a better “Star Trek” series than “Enterprise” or “Voyager” were.

Wish it were still airing on Fox. Guess they had to make room for non-celebrities singing in ridiculous masks or whatever it is….

Today is now
Reply to  Satan

All I’m asking is stop referring us to Star Trek. I’m not asking for much there’s those of us that have no idea and don’t care. Frankly speaking Any of us don’t care. We just enjoy the show

I have been living a long healthy life and in all those years of watching tv this movie is the best, along with Tool Time and Last Man Standing. It is an all around Series for personality and important life messages and it is extremely funny/comical. I am a thinker by trade and my job requires me to brainstorm every day, who ever brainstormed many of these episodes did a wonderful Job. All of the Carrie tees/actors and actresses were perfectly picked. Finally, I am very ill and this show has raised my sprints tremendously, I have literally watched the… Read more »

The only reason I subscribed to Hulu was for the Orville.

Yes yes yes can’t wait for season 3,
Hopefully seasons 4 through 20 too.
LOVE THE HUMOR, ONE OF MY FAVORITES.

Best show aired since StarTrek The Next Generation

Already spending too much on streaming services!

That’s so great, I love the show I’ve been looking all over for information on the show thank you so much

Debra
Reply to  Today is now

I really wish your show would come to prime Canada.

All the episodes were on CityTV before. But I don’t see them on their website anymore. Both seasons are on Disney Plus if you want to go that route.

Today is now
Reply to  Debra