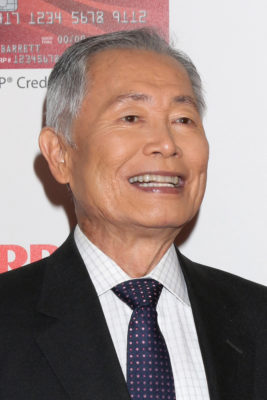 George Takei is coming to AMC. Today, the network announced the Star Trek star has joined season two of The Terror.

An anthology drama, season two of The Terror “centers on a series of bizarre deaths that haunt a Japanese-American community, and a young man’s journey to understand and combat the malevolent entity responsible.” The cast includes Derek Mio, Kiki Sukezane, and Miki Ishikawa.

On season two of The Terror, Takei will be playing “Yamato-san, a former fishing captain and community elder.” Takei will also serve as a consulting producer.

Read more info from AMC below:

NEW YORK, NY – December 18, 2018 – AMC announced today that renowned actor, producer, author and activist George Takei (“Star Trek”) will join the second season of the critically acclaimed, Ridley Scott-produced anthology series, “The Terror,” as a consultant and series regular. The network previously announced actor Derek Mio will star in the series as Chester Nakayama and Josef Kubota Wladyka (“Narcos”) will direct the first two episodes. Production is scheduled to begin in January in Vancouver. Season two will air on AMC in 2019 with ten episodes.

Set during World War II, the second season of “The Terror” centers on a series of bizarre deaths that haunt a Japanese-American community, and a young man’s journey to understand and combat the malevolent entity responsible. Season two is co-created and executive produced by Alexander Woo (“True Blood”) and Max Borenstein (“Kong: Skull Island,” “Godzilla”). Woo also serves as showrunner.

Made famous for his role as Hikaru Sulu in the legendary science fiction series “Star Trek,” George Takei’s career spans more than six decades in film, television and the stage. As a child, Takei was imprisoned in two Japanese-American internment camps after the outbreak of World War II. His personal experience and knowledge of this chapter in U.S. history led him to become a leading figure and activist for social justice. As a consultant, Takei will work closely with the executive producers to ensure the accuracy of historical events and storytelling. On the acting side, he will play Yamato-san, a former fishing captain and community elder.

I hope that being set within a time frame that still has folks who lived through these events doesn’t take away from the supernatural effect of Season One. It was the mystery of several different factors that made One so suspenseful. You kept waiting for an explanation & then something else would happen. But in the 1900 & 2000’s there are few alien or ghost stories that have endured, with Area 51 and the Bermuda Triangle being the most long lived. Also, the cast of One was very good so the new folks have a high standard to reach. I’ll… Read more »