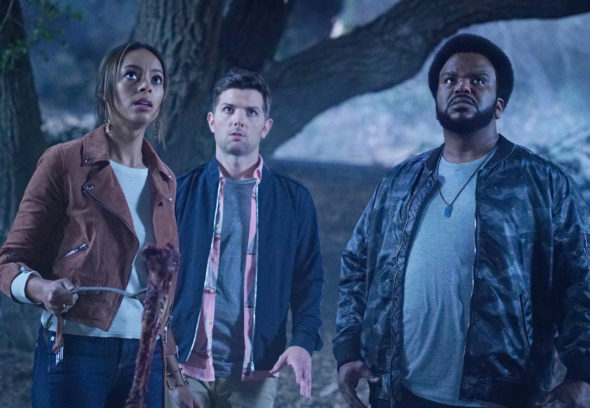 Leroy and Max have been ghosted. FOX has cancelled its Ghosted TV show. There will be no second season of the interrupted series, which took a long, awkward hiatus and switched showrunners part-way through its freshman outing.

Ghosted: A Look at the Ratings

The first season of Ghosted is averaging a 0.94 rating in the 18-49 demographic and 2.398 million viewers. Find out how Ghosted stacks up against the other FOX TV shows.

It’s official: Fox will have a clean live-action comedy slate next season with no returning series. The network has formally canceled Ghosted, its last remaining series that was still awaiting word on renewal.

Ghosted‘s cancellation had been considered a foregone conclusion but Fox postponed the decision until after the comedy returned for the remainder of its freshman season earlier this month. With the options on the cast expiring this coming weekend, the network was prompted to act.

Ghosted joins the other cancelled FOX live-action sitcoms, The Last Man on Earth, LA to Vegas, and The Mick, as well as New Girl, which ended. Only Brooklyn Nine-Nine was rescued from its FOX cancellation, when NBC picked it up for a sixth season.

What do you think? Did you watch the Ghosted TV series? If it had been up to you, would Ghosted have been cancelled or renewed for season two on FOX?

I absolutely loved it, why does this keep happening good shows then oops no CanCEllEd!! It’s so upsetting!

Its very unfair, of how the Ghosted series ended, and doesn’t come back for a season 2

I was disappointed that ghosted was canceled. I was just really getting into it.

Super rediculous !!!! All about keeping up with other stations i guess.gotta compete. Gonna replace this fun show with stupidity like another hospital drama or another lets date on tv for 6 weeks and get married competiton show. Im done with FOX !!!! Canceling all the good stuff for straight up DRAMA !!! dont they realize the more good shows they cancel, the more people are going to watch other stations and the more shows they will have to cancel because no ones watching the station ???
I just give up.

I loved this show! and The Mick, Last Man on Earth, and LA to Vegas. I have nothing left to watch. Guess I have to go and get a life now. FOX I despise you!

I loved the show. It figures it would be cancelled.