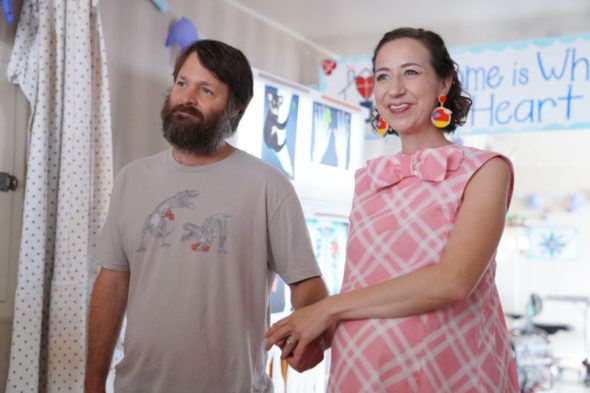 It looks like season four is the last that we’ll see of The Last Man on Earth. This week, FOX cancelled the low-rated Sunday night comedy so there won’t be a fifth season.

A FOX post-apocalyptic comedy, The Last Man on Earth stars Will Forte, Kristen Schaal, January Jones, Mel Rodriguez, Mary Steenburgen, and Cleopatra Coleman. After a deadly virus devastates the planet, Phil Tandy Miller (Forte) believes he’s the last human alive. Eventually, he finds other survivors and alternates between misery and elation. In season four, to avoid nuclear fallout, the survivors set sail for Mexico, even though none of them know how to pilot the boat. They also have to squeeze in two new passengers, Pamela (Kristen Wiig) and her dog, Jeremy.

The Last Man on Earth: A Look at the Ratings

The Last Man on Earth has managed low-to-middling ratings for the past few seasons and this season saw some new lows. Season four averaged a 0.79 rating in the 18-49 demo and 1.95 million viewers.

For comparison, season three averaged a 0.89 rating in the 18-49 demo and 2.12 million viewers. The series could have easily been cancelled a few times over the years due to low ratings. It appears that this time, the numbers just sank too low for FOX. The defacto series finale aired on May 6th.

Jones broke the news on Instagram and thanked the cast and crew and fans for their support.

Creator/star Forte is out of the country but thanked fans in this (hopeful) post from four days ago.

What do you think? Are you a fan of The Last Man on Earth? Would you have watched season five of this FOX comedy?

Yes we indians would love to watch the part 5 plz plz plzzz release the part 5.love from India

Yes! I would have definitely watched as many “Last Man on Earth” episodes as you would have kindly produced. Come on man! Who doesn’t love this show? I have lost faith in humanity. Maybe we need a virus. Covid-19? Just kidding. For real, just kidding. Anyway I am saddened by the cancellation of the show. Damnit man!

I loved last man on earth. Yes I would watch season 5.

Loved the Last Man on Earth… definitely sad there is no season 5!!

My girlfriend and I are sad
Renew pleasssees

Love this show, watched all 4 seasons this month when SBS Australia put them on their streaming service on July 5th. Maybe if Fox sold it beyond the US earlier there’d be a 5th season.
Fox you suck.

Most definitely would have. If a million people watch it, don’t freaking cancel it!!!!

I say we cancel fox! They obviously have no idea what a good show is. Why cancel something that over a million people watch? Dumb just dumb!

OH FARTS!!! I’m disappointed fox tossed this show. They picked up another great show that was cancelled by another network which is absolutely wonderful but this show really had a knack for putting a smile on my face.

hopefully they come to their senses and slip it back in somewhere.

I watch from Canada and so do many others I know. I think their rating numbers may have been a little off on this one.

I loved this show!!!! Every show u watch pn fox gets cancelled do they even count people who dvr the episodes as ratings??? Totally ridiculous i look up when new season comes on only to find out yet again fox has cancelled a show i watch !

This show is incredible. I rewatch every season back to back. It’s one of those shows you can just turn on and laugh unanxiously. I really hope another network picks this up. I’d love to see what Will Forte had planned.

Love it, it was really fun watching. I’ll really love to watch season 5

I really loved this show. Please keep it on. Or at least fingers crossed another network will pick it up. Fox sucks. Was the best sit com they had.