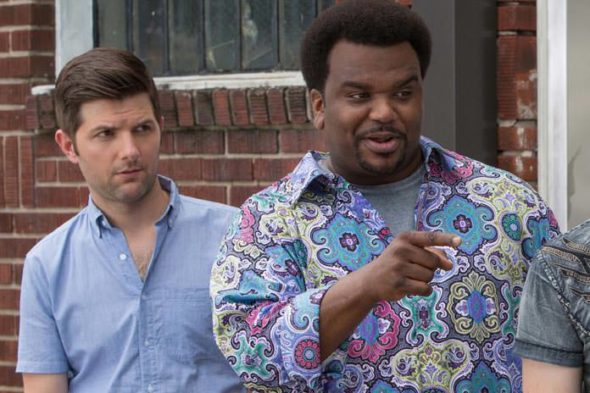 FOX is ready for Halloween early. This week, the network is streaming the premiere of their new TV show Ghosted on Twitter.

The comedy “centers on a cynical skeptic (Craig Robinson), and a genius “true believer” in the paranormal (Adam Scott), who are recruited by The Bureau Underground to look into the rampant “unexplained” activity in Los Angeles – all while uncovering a larger mystery that could threaten the existence of the human race.” The cast also includes Ally Walker and Adeel Akhtar.

Ghosted debuts on FOX on October 1st 8:30 p.m. ET/PT, but you can watch the premiere streaming on Twitter each night at 9 p.m. ET/ 6 p.m. PT through September 24th. Watch the episode and read more details below:

Fox Broadcasting Company (FOX) and Twitter today announced they will partner on a wide range of streaming initiatives to launch returning series EMPIRE and THE MICK, as well as the network’s new comedy, GHOSTED.

“With so much competition out there, it’s more important than ever to create innovative ways to promote our shows and connect directly to our viewers,” said Shannon Ryan, Chief Marketing Officer of Fox Television Group. “From introducing new fans to GHOSTED, to creating a catch-up opportunity with THE MICK marathon, to building fan conversation for EMPIRE with the live pre-show, this exciting partnership with Twitter allows us to tailor each initiative for every show.”

“FOX programs and talent regularly engage fans and drive conversation on our platform,” said Todd Swidler, Global Head, Live Video Business at Twitter. “We’re excited to partner with FOX to bring TV viewing and conversation even closer together. The discussion of TV shows has always taken place on Twitter and it is a natural evolution to add TV premieres and live pre-shows to our video experience.”

A weekly live EMPIRE pre-show will run exclusively on Twitter all season-long, featuring cast members and guest stars from the series, as well as journalists and influencers, to discuss the series. Streaming throughout the season at 7:30 PM ET/4:30 PM PT to drive viewers to the drama’s new time at 8:00 PM ET, the pre-show will launch on Wednesday, Sept. 20. EMPIRE is the No. 1 most social broadcast primetime TV program on Twitter and Facebook combined* (based on average episodic total social interactions) and the No. 1 most socially engaging primetime broadcast drama**. Follow the series @EmpireFOX and join the discussion using #EmpirePreShow.

Marking a Twitter first, the premiere episode of GHOSTED will stream nightly at 9:00 PM ET/6:00 PM PT, from Thursday, Sept. 21 to Sunday, Sept. 24. The streaming episode will feature a special introduction by the show’s stars, Craig Robinson and Adam Scott, with a Twitter Q&A featuring members of the show’s cast to follow each night’s presentation. Follow the series @GhostedonFOX and join the discussion using #GhostedPremiere.

Tonight, beginning at 11:00 PM ET/8:00 PM PT, Twitter also will stream a marathon of Kaitlin Olson’s Top Five episodes of THE MICK. The episodes will stream with a special introduction by Olson, and will feature live Tweet participation by the show’s cast and producers. Follow the series @TheMickFOX and join the discussion using #TheMickBender.

What do you think? Are you a fan of FOX’s comedies? Will you watch Ghosted?